The principal can’t explain apparent environmental insults because the project isn’t yet finished? 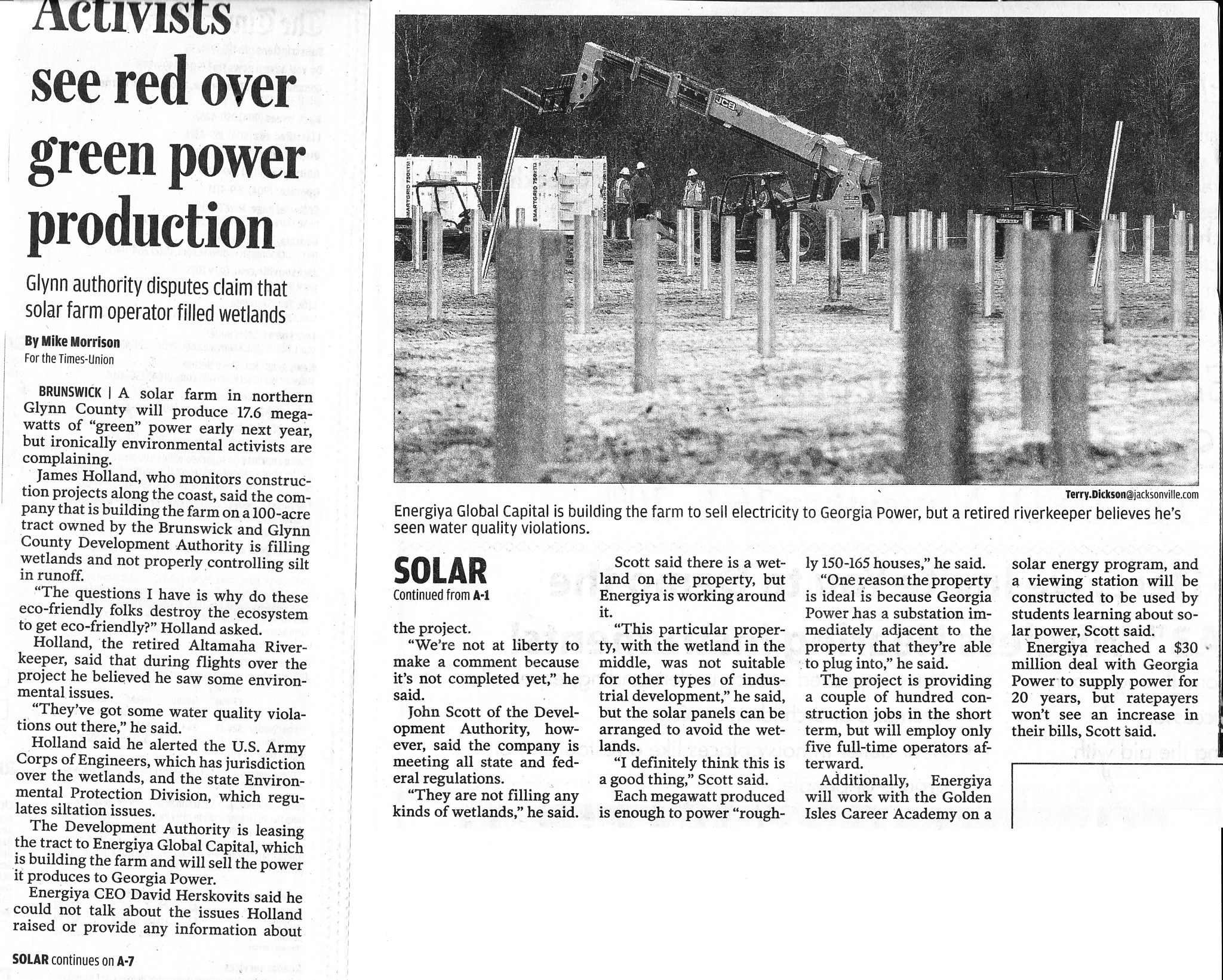 Well, at least it’s nice to know the Brunswick/Glynn Economic Development Authority is just leasing the land and will, presumably, be collecting rents. So, now the only question is what payments in lieu of taxes are going to be forwarded to the County and the School Board. Granted, five permanent employees aren’t going to put a lot of children in the schools. On the other hand, if there are only five employees, the County is going to have to provide a lot of security services for such a large area.

Contrary to John Scott’s claim, they have cut the trees and filled the swamp along the road and the 200′ naturally vegetated buffer promised for the wetlands is nowhere in sight, which calls into question the credibility of all other commitments.

That the rates customers will have to pay for electricity won’t increase as a result of this project is sort of irrelevant, considering solar power is supposed to be cheaper and friendly to the environment. On the other hand, this irrelevancy might well be considered another form of deception. Fact is we’ve had forty years of economic development in Glynn County and still 19% of our population’s income is below the poverty line. Them’s the facts.

But, Mr. Herskovits is “not at liberty.” Does that mean the cat’s got his tongue?

It strikes me as passing strange that a letter from you granting a variance from stream and marsh buffers would direct the recipient or other interested parties to communicate telephonically with one of your subordinates. This referral suggests that project files, albeit provided with an index number, are not set up and organized to track the project and log communications with any sort of consistency. If that is the case, then that represents a failure of management, which is why I am addressing my on-going concerns about this project to you. If I have misunderstood, then consider this a GORA request to review the files, including inspection reports and coordination with other political entities, such as Glynn County.
END_OF_DOCUMENT_TOKEN_TO_BE_REPLACED

Hog Crawl Creek is where James Holland goes to expose Glynn County’s dirty tricks. Why do I say that? Because the County sought a letter of permission to do one thing and then went and did something else. I am going to append the relevant images here and use the next post for James’ verbal description in his formal complaint to the Environmental Protection Division.
END_OF_DOCUMENT_TOKEN_TO_BE_REPLACED

I’ve written quite often about how privatization represents an effort on the part of public officials to engage in activities second hand, or at one remove, that they are not empowered to undertake themselves. Or, at least, not with the caprice and abandon they prefer. However, privatization also seems motivated by a desire to evade both the standards and the enforcement mechanisms communities have at hand to ensure compliance from public officials. It isn’t just a matter of getting away with malfeasance by operating through a surrogate; it can also be a matter of evading the obligations of steward ship entirely.
END_OF_DOCUMENT_TOKEN_TO_BE_REPLACED