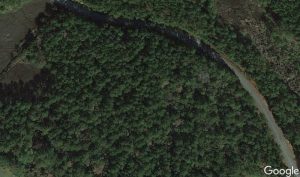 Normally, disgruntled residents are inclined to blame real estate developers for the disruption of their neighborhoods and, on the Georgia Coast, the removal of the tree canopy which ameliorates temperatures and deflects strong winds. In this case, that would be unfair since the Frederica Baptist Church is obviously not motivated by commercial interest and, indeed, on the original site plan submitted for community review, made explicit their concern about unnecessary tree removal. 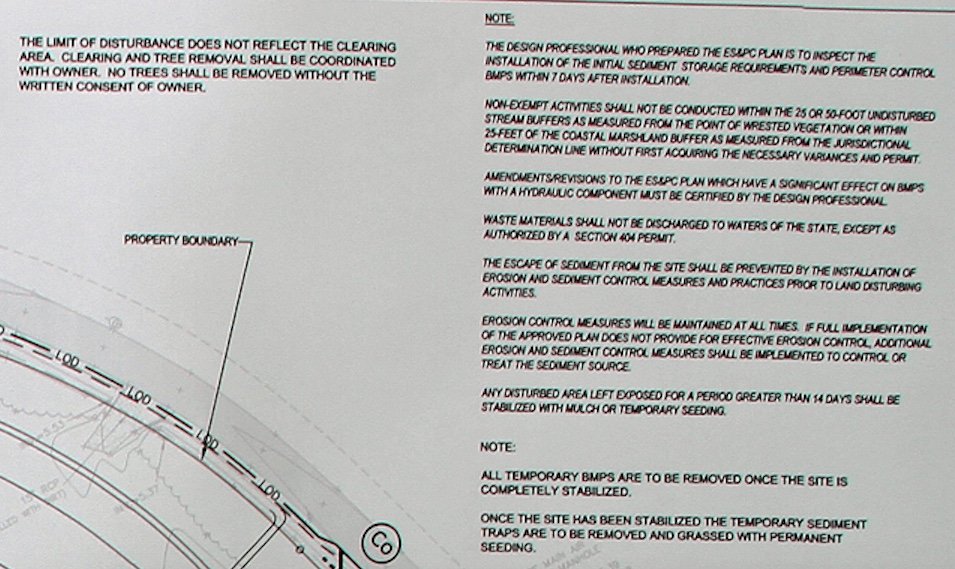 Indeed, the commitment to have tree removal formally authorized by the owners accompanied several iterations of the site plan until we ended up with this: 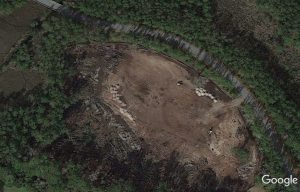 If the Google Earth image is not sufficiently instructive, James Holland provided documentation of the devastation of the swamp. (Click on the thumbnails to enlarge)

Who knew that a site plan, once approved, would not have to be reviewed by the same entity –i.e. the Islands Planning Commission, if there was to be a significant change? Would close inspection of the original plan have revealed it? 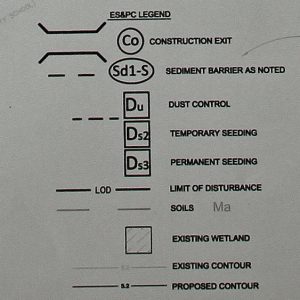 Not really. After all, though the legend panel indicated two delineations of elevation above sea level, the number indicated (5.3′) is the same. While that is marginally better than the Mariner’s Landing site (4.5′), which was fudged by indicating one spot in the far west corner as the elevation for the whole site, 5.3′ should ring alarm bells. Because, where the natural land elevation is 7′, that’s the elevation (5.5′) of ground water. In other words, the Frederica Baptist Church site is a swamp that went unnoticed until after the trees were all taken down. The site plans presented to outline the strategies of erosion and sedimentation control track the evolution of the plans. With whose approval were the wetlands submerged under 3+’ of clay and sand or Mandarin soil? Nobody’s! Filling is not an activity that requires a permit.

“I am no engineer, however, after reviewing these site plans it appears to me that these site plans fall far short in describing (Showing) Best Management Practices (BMP’S) to protect our wetlands and salt marshes that surround one side of this site. For instance, I observed no BMP’S to protect sediment in storm water run off in the area where the large buildings are to be constructed as if there will be no sediment disturbance in these areas. Same for the construction entrances and exits (No Gravel Pads). The area where the detention pond is to be constructed, no BMP’S to protect the sediment basin from sediment in storm, wind and rain events. The structure leading from the sediment basin carrying storm water to be discharged into the Wetlands (State Waters) appear to show no BMP’S to protect these sensitive areas. I should not be the one to remind the state and county government that once the detention pond is constructed and connected into the treated storm water discharge the basin and its structures will be classified as State Waters…. Also, it appears that part of the sediment basin and the ditch to the wetlands will be created on and or through what appears to be wetlands (BO)(Bohicket Soils) which appear in the site plans as wetlands on one side of the double row of silt fence on the back side of the site. Yet, on some of the site plans these BO soils do not appear at all on the development side of the site plans (WHY)? Surely, we don’t believe that wetlands end at the property line? EPD called these areas low spots on the EPD inspection report.”

Utility officials assert that, if they were prohibited from laying lines (water and sewer) in water, all new development would grind to a halt. Of course, that is hyperbole. Not only is the Brunswick peninsula, which is well served with lines, grossly underdeveloped and, in some section,  in serious need of re-development, but Saint Simons Island has at least a thousand lots that have been platted, provided with utilities, but not built out. Never mind the 500 septic tanks on Sea Island that need to be connected to the treatment plant. There is plenty to do in the current geographic service area without sending lines into the boonies.

Does it make sense to restrict construction to 7′ above mean sea level and above? You bet. Permitting building in the flood plain is a recipe for disaster. Never mind that the loss of our maritime forests puts the whole coast at risk, reduces carbon sequestration and prevents the recharge of the aquifers.