Dear Friends of SLEAT:
First, a reminder of upcoming meetings the week of August 17th, 2015

Friday, August 21, “Puddy” Smith, one of the original incorporators of S.L.E.A.T. returns to the island for a week in preparation for a permanent relocation at the end of September.

REPORTS;
The Initiative to Protect Jekyll Island reports in its summer news letter that the Westin Hotel is out of compliance as regards to lighting the beach, other hotel plans have been put on the back burner and the IPJI is keen to have more participants on its Facebook page. https://www.facebook.com/mindy.egan

Glynn Environmental Coalition, GEC, asks that you set October 10 aside to commemorate the 25th Anniversary of the organization with Dining, Dancing and Dalliance (including a silent auction) on the shores of the mighty Altamaha from Noon-4:00 PM at Mudcat Charlie’s Pavilion https://www.facebook.com/groups/149360464794/

James Holland reports unauthorized clear-cutting on the 686+ acre tract just east of I 95 along native road. Since the parcel is already zoned PDG (planned development general) it isn’t entitled to conduct timbering operations and should, ideally, provide a tree survey before land disturbing operations are undertaken.County records identify this as parcel # 03-12108, owned by Brunswick Exit 42 LLC, registered in Georgia, whose agent is Joseph Strength. 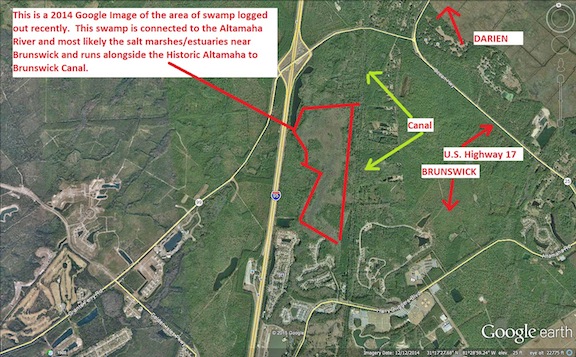 More evidence of the butchery, along with various insults to the wetlands on the edge of the historic Altamaha Canal will soon be posted on Mr. Holland’s blog http://www.jameshollandphotography.com/blog/

Like the Dew, a Journal of Southern Culture published http://likethedew.com/2015/08/16/pervasive-patterns-deception-golden-isles-georgia/

Hopefully, it will be a prelude to getting the Brunswick Waterfront cleaned up by insuring that all the lease holders are in compliance with building permits, storm water permits and waste water permits so more conflagrations and the pollution of our rivers can be avoided.