As part of its spring routine, the Georgia Department of Natural Resources is updating rules and regulations to comply with eequally ineffective EPA revisions, even though state standards are supposed to be more restrictive.
The list, five of which are still timely for a response, is here:
https://epd.georgia.gov/public-announcements-0/proposed-rules

Brunswick Cellulose, together with the Joint Water and Sewer Commission has schduled a community meeting at the Greater Works than These facility on Faith Avenue, to discuss complaints about odiferous emissions. Put March 3 between 5 and 7 PM on your schedule. I’m more concerned about the ash that’s deposited on the Brunswick Villa neighborhood, as well as the mercury the plant is permitted to emit.

We hope you are not tired of elections because 2022 is a big one. All House seats and one third of the Senate will be on the ballot. But first, there is qualifying for primary elections, which will close on March 11. There are already a number of candidates applying for the First Congressional District and, once their number is known, SLEAT proposes to hold a forum in Brunswick. The current target date is March 19 and we hope to arrange a venue in the coming week. The primary election will be held May 24.

Manwhile, I’d like to call your attention to The CurrentGA, an online news source focusing on the coast.
https://www.facebook.com/TheCurrentGA/
There has been some good coverage of the Camden Spaceport and the Brunswick trial of the murderous trio. When the reporters contribute to the GPB program “Political Rewind,” they are a welcome addition.

Dear Friends of SLEAT
Email software upgrades have eliminated some accounts from my laptop. Ergo the forwarding roundabout.
The Beachview Club Hotel on Jekyll Island, our public resort, is offering 20% discounts during the winter months to experience nature by using the booking code WINTER20.
*******
The Board of the Georgia Department of Natural resources is to consider a revision of clean water rules that are consistent with EPA standards.
“EPA has reviewed and provided comments to EPD regarding eighteen Rules in this Chapter: Rules 391-3-5-.02, -.10, -.15, -.18, -.20, -.21, -.22, -.23, -.24, -.25, -.27, -.29, -.30, -.32, -.52, -.53, -.54 and -.55. The proposed amendments to these Rules address EPA’s comments, which are related to seven prior federal rulemakings, and will ensure consistency between the federal rules and Georgia’s rules. EPD is also updating Rule 391-3-5-.19 to incorporate a drinking water contaminant limit that was inadvertently missed. Proposed amendments to these nineteen rules are responsive to the directive in the Federal Safe Drinking Water Act, 40 CFR Part 142, which requires States to adopt new or revised federal regulations in order to maintain primacy (primary enforcement authority) over public drinking water systems. The Director of EPD certifies that the amendments of Rule 391-3-5 are required by 40 CFR Parts 141 and 142, and EPD is delegated by EPA to implement Sections 300f-j of the federal Safe Drinking Water Act.”

Imagine! A “contaminant limit” was left out of an earlier publication. When you start out stating how much poison is permitted, you’ve already lost. It’s like those “less than lethal” weapons we issue to the cops.
Anyway, comments need to be received by EPD by February 5, 2021. EPDComments@dnr.ga.gov
*******
The BN did publish this the other day. I do not expect widespread agreement.

Develop is a synonym for destroy. We should have learned that several decades ago when urban redevelopment ripped the hearts out of our cities, relocated retail to suburbs and turned farm land into instant slums.
That is what Glynn County’s department of community development is about–the planned destruction of our natural and built environment. That is why the files of County government are full of planned developments. That is why our woodlands and marshes are being razed, dredged and filled in the vain hope that some sucker will come along and fork over a bundle for a plot in amenity land. Frederica Township is full of them.
Economic development is no different; just a more honest admission that our natural heritage is to be sold off for dollars and cents.
Money is not the root of all evil, but it sure provides good cover.

*********
Looks like the just-concluded federal administration was mostly a grandiose development scheme. The DOJ lawyer, Jeffrey Bossert Clark, who offered to use the DOJ to reverse the decisions of the voters, has been in charge of land acquisition for the border wall for two decades via eminent domaine. There is an interesting interview from last year at E&E News. https://www.eenews.net/stories/1061012289
At no point is there an indication that citizen or environmental interests are considered. The DOJ’s “clients” are the other executive departments.
Yes, the deep state is made up of appointed professional public servants whose main interest is in promoting and enlarging their fiefdoms. This puts them in cahoots with elected officials who also do not what to be told what to do by the citizenry. The people governing is not a welcome development.
I was pleased to hear Biden emphasize what democracy means. We do not just hire; we also give orders.
******
One more thing. The foul odor in Brunswick. I have been wondering if our multiple crematoria are to blame. L.A. has suspended its air quality standards to accommodate the backlog of dead to be disposed of. Seems that mercury from fillings is a major offender. Mercury is presumably odorless, but it is an emission that is measured because of its negative effects when it is taken up by organisms in the environment.
******

The built environment is, of course, also of interest. To that end, let me report that the City of Brunswick has not only undertake to do its own property tax collecting, but has followed up with its first “tax sale,” held this December 3, 2019 on the second floor of the Old City Hall. After duly advertising and notifying property owners who were delinquent for 2018, the City ended up with 17 parcels to auction. Since most of the properties owed about $900 and bidding started at the owed amount, the City could have expected collecting about $15,300. However, as it turned out only five of the properties went at the base price. So, the City Clerk is looking to collect some $67,500 within an hour of the close of the auction when the person winning the bid has to show up at City Hall with cash or a certified check. The owner of record has a year to buy back the tax deed.

After that the holder of the tax deed can sue to secure title, which will probably also involve some expense. But, in the mean time, the citizens of Brunswick are no longer subsidizing dead beats. I should also note that a good chunk of taxes due are to put funds into the new storm water utility, an affirmative effort to address our location in the flood plain.

Bonus pic, behemoth in the Sound. 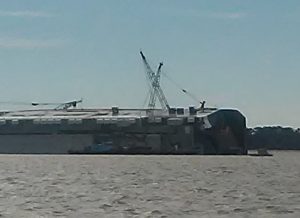