Scott Steilen, the self-identified President of Sea Island Acquisitions, the outfit that bought the resort out of bankruptcy for about forty cents on the dollar, is delusional if he thinks a full-page ad in the local rag, the Brunswick News, will dispel what he calls “misunderstandings” about extending their exclusive development down the fragile, eroding sand dunes on the southern end of the island. 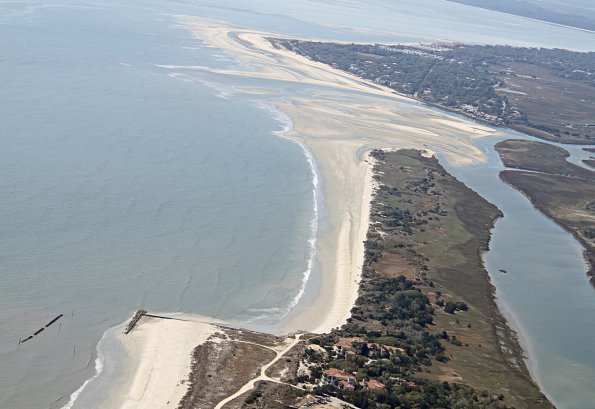 That development permits were issued a decade ago doesn’t mean they were well-advised then or now. After all, even five years ago, the island was declared all built out and then another hundred McMansions and two hundred condo units were erected on the flood-prone terrain. The installation of a sewer force main and lots of fire hydrants may have created the impression that our standards for public utilities were being satisfied, but the fact is that OSDS (on site disposal systems, aka septic tanks) continue to be installed on lots that are barely adequate to contain the footprint of 6 bath McMansions and the ubiquitous in-ground pools.

The Cloister Reserve will have private water and sewer. No septic tanks will be installed. Neither Glynn County nor its citizens will be responsible for utility development, flood insurance, or any construction or maintenance of the private road that will lead to the Cloister Reserve

is, at best, a compendium of half-truths. The water being pumped out of the ground is a public resource and, in the event it makes people sick because contamination has seeped in or salt-water has intruded into the aquifer, not only will the whole community be affected, but Glynn County will be obligated to respond. Just as a driver who’s wrapped his Jaguar around a tree loses both life and privacy, the residents of Sea Island, whether they admit it or not, count on the County to respond whenever private efforts aren’t enough. Never mind that the sewage collected from the hotel and condos gets pumped out to be treated at the public Water Pollution Control Plant, fire suppression and emergency medical services are provided by neighboring Saint Simons and the County is responsible for seeing the trash gets hauled out.

All across the nation, private developers are responsible for constructing infrastructure (water, sewer and power lines and roads) according to public standards and by accepting these facilities as public assets our governmental bodies certify that these standards have been met–a step these new-fangled private reservations aim to avoid by promising to provide maintenance themselves, unless and until they go belly up and the gilt is revealed ashaving covered over rot or, in the case of Sea Island, five hundred seeping leach fields.

That the proposed eight unit reservation will rely on centralized sewer connections is worrisome in itself. Not only will a lot of sand dune have to be dug up to install the sewer lines and roads serving the half-acre lots, but the houses will likely be outfitted with grinder pumps and two inch lines, instead of the eight inch pipe that’s standard in gravity-fed installations. So, if the electricity goes out, the sewage will back up.

The EPA has an on-going education program, based on the fact that “Your septic system is part of your home and your responsibility” and provides these handy tips:

Keep it Protected–Get it Inspected!

Have your septic tank inspected and pumped out by a licensed septic tank contractor as needed (on average every three to five years).
Don’t Strain your Drain!
Use water effciently to avoid overtaxing your system. Fix household leaks, run the dishwasher and clothes washer only on full loads, and consider intalling high-efficiency fixtures.
Think at the Sink
Don’t pour grease, fats, or harmful chaemicals like paints and solvents down your sink. They can clog or harm your system.
Don’t Overload the Commode!
Do not flush non-degradable items such as dental floss, diapers, coffee grounds, or feminine hygiene products (or condoms).
Shield your drainfield by only planting grass, not driving or parking on it, and reducing roof and surface water drainage near the drainfield.

No doubt, the purchasers of million-dollar ocean-front lots aren’t going to be keen on that sort of nitty-gritty attention to detail. So, it’s smart to put them on the centralized collection system and count on grinder pumps, along with the garbage disposal, to macerate the waste as it flows — until the electricity cuts out! While the chair of the Islands Planning Commission opined that the buyers of million dollar lots are sophisticated enough to deal with this stuff, I have my doubts.