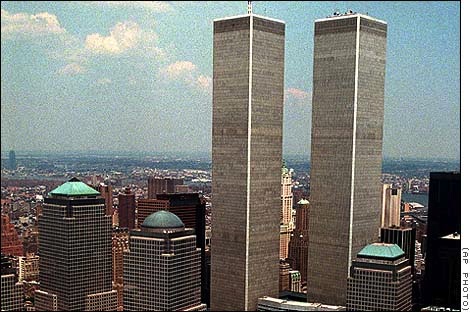 Not all authorities are bastions of corruption, as the Port Authority of New York and New Jersey is increasingly looking to be, but, given that their ulterior purpose is to manage public assets for private goals, without any attendant personal risk, bad taste is perhaps to be expected. Certainly, the World Trade Center towers were a monument to bad taste — two thumbs in the eye of the diversity the New York skyline previously expressed.

James Holland’s perception, that the Jekyll Island Authority’s attitude towards what they call “vista” is similar, has merit.

Viewed from the surf, the Westin is a burgeoning excretion on the skyline. 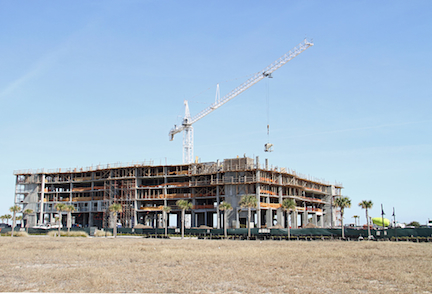 Although, as usual, Holland manages to make the ugly look good.

That said, how to account for the bad taste? Perhaps it is personal risk that makes people do their best. That would account for why so much corporate creation is so down-right ugly and often flimsy to boot.

As to the larger context, I think I’d argue, and have, that:

The proponents of private property argue that ownership is good because owners will, presumably, take good/better care of what they own that what is shared in common. Clearly, that hypothesis has been disproved by the myriad examples of private properties that have been neglected, abused, abandoned and worse. Communal ownership has, on the other hand, been called a “tragedy” (as of 1969) because, again presumably, nobody cares what happens to common land.

People not caring or even persuading themselves that whatever they destroy, mother nature will repair may have “worked” before the industrial age, but now man’s force is so increased by chemical and mechanical means that we are at risk of destroying ourselves and everything we need to live, even if only through “benign neglect.”

Our reliance on surrogates is part of the problem. The genius of democracy is that power is dispersed over the whole population, only to be assembled in times of need. However, that doesn’t mean the delegates can just be left to manage without public supervision. Somebody has to be watching them all the time, because power to act, especially the power to act without consequence, is seductive.

Moreover, it is in the nature of power that, to be felt, power has to hurt. So, it’s almost inevitable that the lust for power leads people to engage in and demand irrational actions. The JIA ordering the cutting down of all the shrubbery along the causeway through the marsh is just one example. They ordered it, in part, because somebody else would have to do it. (Not very different from the NYNJPA arbitrarily reassigning the toll booths on the George Washington Bridge because their revenues had dropped). “Opening up the vista” is just an excuse by people whose wanton behavior has been called out. “Political retribution” in New Jersey is similar — an attempt to salvage something from an obvious mistake that’s been exposed.

“Eternal vigilance” is required in a system of social organization where power is dispersed, if only to insure power isn’t amassed surreptitiously. Of course, when sustenance is restricted and everyone’s having to chase the dollar just to stay alive, the ability to be vigilant is severely compromised and people, who oppose all kinds of subsidies, whether for the old or the young or the halt, do so for just that reason. They don’t want to be watched. They figure if the people have to keep their “nose to the grindstone,” so to speak, they won’t have time to tell the authorities what they’re doing wrong. Which is why Holland is a valuable citizen.

Our system of social organization (I hesitate to use the word “government”) is based on complaints. If there are no complaints, then we are inclined to assume that people are doing right. Which is exactly why some of our delegates/agents, not wanting to be restrained, are keen to get ahead of the curve and render the citizenry compliant. Compliant citizens won’t lodge a complaint. Preventing complaint is also what “hoops” are about. (e.g. the Army Corps of Engineers demanding that complaints be lodged on a proper and prescribed “form.” Form over function comes in many flavors).

Citizenship is a bundle of obligations. Some people like to claim it’s a privilege and that it makes them special. It’s not. Being a citizen is work and, while voting is not enough, it is optional. Indeed, the whole bundle is optional, but somebody’s got to:
vote
serve on juries
hold office
provide support
draft laws
enforce the laws

Fortunately, not everyone’s got to do it all the time; we can take turns. But, those citizens who aren’t pulling their weight need to be put on notice; to be reminded that, when they have complaints, they need to be more vigilant and make sure they complain to the right people — the public servants we hire and pay to care for our public assets and used for the general welfare.

h/t to Justice Anthony Kennedy for making the point that the people are the ultimate enforcers of the law. It’s not, as some people might argue, a cop-out. Courts render decisions, but judges have no enforcement powers. If people are to be jailed, the executive has to be relied on. Which is why when the executive is corrupt we are in real trouble.