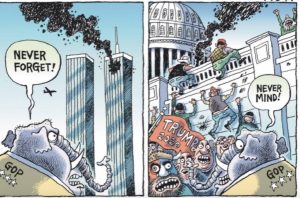 ‘Twas a terrible day, worse that the message was not understood even after the World Trade Center was hit twice. That the use of money to extort the natural resources and labor of the people’s of the world and leave them with barely enough to survive is wrong simply does not register with a commercial class that sees only profit for itself.

Is it better to purchase natural resources with worthless currency and leave the land depleted of wildlife and vegetation than to purchase its people and export them as slaves? Marginally, perhaps. But, after a while the exploited revolt. In the cartoon, the GOP has a response without realizing that decades of deprivation and devastation are at base the reason for both events.

Somebody actually deserves to be terrorized but they are insensitive. The only solution is to put them in physical restraints.

To be honest, I always considered the twin towers an abomination on the skyline of Manhattan. Having them featured in film after film was like sticking fingers in the eyes of the international audiences. Calling punitive trade restrictions “sanctions” did not help. However, the tables have been turned. The dollar is no longer almighty and being challenged on its own turf.

Will the icon be deposed and resurrected as a tool?