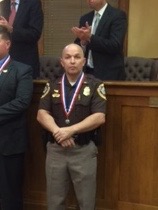 The George Floyd Justice in Policing Act of 2020 is being considered in Congress. It aims, as does so much federal legislation, to use the string of dollars from the Treasury to exact promises of changed behavior from local government law enforcement practices, in this case.

Will it be effective? Localities that have independent audit functions can track compliance with contract requirements, but auditors have no enforcement powers. The citizenry must enforce.

In any event, we have a wonderful exemplar of misadministration right here in Glynn County. While the killing of Ahmaud Arbery by some rogue vigilantes has grabbed national attention, the pattern and practice, which put anyone and everyone in jeopardy, were evident for years in the Glynn County law enforcement and justice system. Martin Reagin (2009), Caroline Small (2010), Katie Kettles and John Hall (2018), all innocents, ended up dead after a confrontation with GCPD. Roxanne King and her three children were luckier in 2015. They survived a nighttime home invasion by a 14 man SWAT team and Ms. King was able to have a local lawyer file a suit for compensation three years later. However, largely because of a lack of evidence and information, the suit was summarily dismissed by a new judge in the District, R. Stan Baker, who had paid obviously close attention, after he issued a stinging order (10 pages) and an opinion (12 pages), which can be found here: https://casetext.com/case/king-v-marcy-1

One of the main provisions of the George Floyd Justice in Policing Act is described as follows:

Change the threshold for the permissible use of force by federal law enforcement officers from “reasonableness” to only when “necessary to prevent death or serious bodily injury.”

Whether the behavior of the GCPD SWAT team was reasonable on the night of December 15, 2015 was the standard Judge Baker considered and it might have been fairly debatable, if the plaintiff’s attorney had made a real effort. That W. Douglas Adams, whom Roxanne King engaged to seek compensation for the distress inflicted on herself and her children the night of December 15, 2015 when temperatures were in the 40 degree range, was derelict in his service is likely what prompted Judge Baker to issue both his interim order and a lengthy summarizing opinion.

The order was necessary because four years after the incident, the individuals identified as defendants had either not been properly identified or served in person with the complaints. Although an initial reference to John Does 1-10 and Jane Does 1-4 had been amended with the responding officers’ names, some of the names were incomplete or wrong. One suspects that the GCPD was either not forthcoming or the attorney did not request the logs of the incident in question. One might note that the swarm of officers responding to the shooting of Ahmaud Arbery five years later are also only identified by last names and an incident report has not been made public.

Of xourse, when a swarm of a dozen or fifteen individuals targets a single location, it is extremely difficult for anyone to keep track. Which is why we have supplied law enforcement agencies with electronic hardware and software to facilitate individual record keeping of activities and after-incident reports. And, if such records are kept and retrieved upon request, then Defendants will find it more difficult to argue dismissal because “Plaintiffs failed to identify the first names of Defendants Leska, Cooper, and Lowther….” Are we to conclude that officer failure to provide proper identification whenever there are interactions with civilians is intentional?

Procedural problems in the case of King v. Marcy abound on both sides. However, Judge Baker found it necessary to write:

Finally, as laid out above, the Court finds that the significant errors in this case are due to the actions of Plaintiffs’ counsel, not Plaintiffs. Counsel has made errors that can only be attributed to a blatant disregard of the Federal Rules of Civil Procedure and this Court’s Orders. While the Court has decided not to sanction Plaintiffs’ counsel at this time, counsel’s actions should not go unaddressed. Further, the Court is concerned that Plaintiffs are unaware of their attorney’s inaction and the resulting delays in the administration of their claims. Consequently, no later than seven (7) days from the date of this Order, Plaintiffs’ counsel SHALL CERTIFY to the Court that he has provided his clients with a copy of this Order and that his clients have acknowledged receipt thereof.

Is it relevant that W. Douglas Adams is the brother of Ronald M. Adams, Clerk of the Superior Court elected in 2017?

The final order, issued not quite four years after the incident provides much detail, beginning with the “undisputed fact” that a GCDP investigator overheard a statement by a person in custody for armed robbery and was prompted to seek a no-knock wrrant to search for a gun at a residence, where the arrestee did not in fact live and whose owner could have been readily identified from GIS records to grant access to the police, instead of proceeding on the basis of rumor and the “known histories of individuals associated” with an address that is occupied by transient renters.

Who takes the word of a robbery suspect about anything?

The Defendants provided the Court with an audio recording of the incident from which the judge was able to deduce several matters. At no point in there an indication that the four adults, having been handcuffed and threatened with weapons were told they were under arrest and entitled to contact a lawyer. Apparently, our agents of law enforcement do not consider an arrest to commence until they announce it and any prior interaction is off the record.

However, the judge ruled as he did because civil rights only go into effect after an arrest and formal charge. So, whatever indignity the cops can get away with ahead of that leaves them in the clear. In effect, the required Miranda warning is an escape hatch.

No doubt, having the children hauled naked out of the tub and put outside on a 40 degree night was enough to intimidate the parents into reluctant compliance. Indeed, Marcy, the investigator went so far as to recruit Ms. King to research the owner of the neighboring property. Since this information came from an official recording, one wonders what discplinary measures were enacted by the GCPD to avoid such exploitation in the future. (I myself have been told by a GCPD officer that, since I was not being useful, he wanted nothing to do with me).

There are disputes as to the timing of events. If the department kept accurate logs of assignments and timed check-ins, those could be easily resolved. However, the Plaintiffs’ attorney seems not to have made the effort. Judge Baker writes:

Plaintiffs fail to provide citations to support most of the factual assertions in their Response. This “failure to cite to the record in their memoranda [opposing the] motion for summary judgement is sloppy, to say the least” … and the Court was forced to scour the record, expending valuable judicial resources. This is not the Court’s duty….

What Judge Baker deduced from the records provided:

Defendant Sasser was an assistant SWAT commander of the search (Doc. 56-6, p. 24; doc. 56-7. p. 19) During the SWAT briefing, Sasser told the officers “what [they were] doing and how [they were] going to make entry into the house.” (Id.) Marcy testified that he may have called Sasser to let him know Judge Cabiness had signed the warrant. (Doc. 56-4. p.18)

As the law stands now, the question is whether the use of force is reasonable. So, some questions about reasonable seem in order here:
1) Is it reasonable to institute an assault and search on the word of an arrestee or does that put any householder or tenant at risk of being targeted by a disaffected neighbor?
2) Is it reasonable, in a state that allows the possession of firearms, to institute a no-knock assault by law enforcement on any residence because a firearm might be present?
3) Is it reasonable to forcibly remove children, clothed or unclothed, from the security of a home in the name of “securing” the location?
4) Is it reasonable to rely on hearsay as a basis for a criminal investigation?
5) Is it reasonable for agents of government to detain anyone, absent an emergency declaration? Did the warrant in this search authorize the removal and detention of any person from the premises?
6) Is it reasonable for law enforcement to base investigative decisions on the fact that (https://casetext.com/case/king-v-marcy-2) “The police department’s computer system showed that multiple known or suspected residents of the home had ‘alert codes . . . for being very antipolice'” or is that a misuse of the computerized information system?

Over four decades of monitoring police departments, it has always been my understanding that the purpose of computer assisted systems was to increase the efficacy and accuracy of police functions, not to monitor the citizenry or facilitate entrapment.