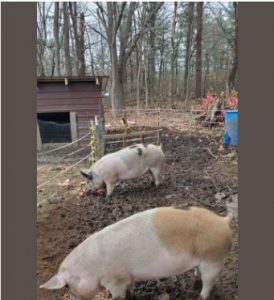 The Girls Summary: I will not raise pigs using factory farm methods. So this is what I did.

Feeding:
I grew up in the restaurant business. Pigs like human food. When it got cold I spent an hour each day on 2 preps and feeds. For each meal I mixed 2 gallons of boiling water to the grain, corn and whatever else they ate. I then cooled it to lukewarm and fed them.
In addition to grain and cracked corn they were fed:
* Fresh produce from an organic farm
* Expired bagels from Brown’s
* Pears, peaches, apples & pumpkins
* Acorns
* Expired Beer and wine
* Freezer food more than 6 months old.
* Table scraps
Care:
* I built them an on demand watering system.
* I filled their mud pool with water when it was hot. Pigs don’t sweat so they like mud when it gets hot.
* When it rained heavily I bailed out their pen.
* Pigs Chungas was the dominant. Miss Piggy wasn’t getting her fair share of food. I built an electrified feeding partition to ensure that they both ate the same amount.
* Their enclosure was roofed and sided so they could stay dry and out of the weather.
* They were given a hay bed in their enclosure when it was cold.
* Their pasture was changed periodically.
* Their coats were brushed, and they recieved neck rubs.
So they lived quite well.

Until they were taken to be slaughtered.