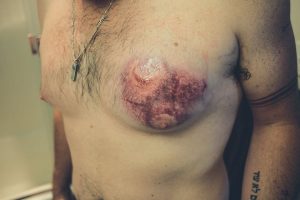 So update from the Portland front. Before I go any further I want to say that I’m gonna be ok and it was close but I am luckily not critically injured. And Black Lives Matter. Feel free to share this post.

A little after 1 AM last night the feds decided to try and push Portland out of the park across from the courthouse (which has been the focal point of the demonstrations since the feds arrived).

They came out hard with tear gas, pepperballs, and baton rounds and people scattered. I ended up down the street from a line of them, and began moving my way back and forth across the front line of protestors, helping evac a couple injured people and checking on others. I was clearly marked as a medic, with red crosses on both my legs, both my shoulders, two different places on my hat and across my med-pack. After a few minutes of standoff the Feds tossed a tear gas canister at a group of reporters and LOs that were at the corner of 3rd and Salmon filming them, about 15′ away from the Feds line. I doused the canister with water from my bottle and stood up and began to check if any of them had been hit by the gas. I straightened up and was immediately struck directly in the chest just above the heart by a launched and burning tear gas canister. It took me off my feet and knocked the air out of my lungs.

My crew saw me go down and came and got me and carried me a block away to where other medics could start checking me out (get yourself some comrades who will run through a teargas cloud and a hail of rubber bullets to come get you, they’re the best kind of friend in the world) and quickly determined I needed to go to the ER.

One of my boys was livestreaming when it happened, and while you can’t see me get hit you can see me in the video before hand several times and then you can hear them running to me and moving me after he stuffed his phone into his pocket. It’s intense but not overly graphic, so I think I encourage people to watch (and maybe more importantly listen as most of the video after I’m hit is just sort of indiscernible motion but the audio is super clear), so you can understand what is happening here and what the government of our country is unleashing on its people. If you don’t want to watch the whole 10 minute clip I’d start it around the 7:30 mark.
https://www.instagram.com/tv/CDGUFMgpVSa/…

One of the Wall-of-Moms Mom’s bundled me into her car and drove me across the river to the ER at Legacy Emanuel (god love
a mom). I got an extensive check-up, xrays and ekgs and the good news is nothing is broken or permanently damaged (and my heart held up like a champ and is all good for those of you worried about that!) so the official diagnosis is a severe chest wall contusion. I’m in a lot of pain but managing it (shoutout to vicodin), and immensely grateful it hit me where it did and not a couple of inches higher. Shoutout to James Krane for riding it out with me in the ER in the midst of a pandemic. And the photos below are his too, his insta is ripcityview (some of the best protest pics in the biz if you’re looking!). First is me after I got hit, then the ER last night and the injury this morning.

I also want to note that I was one of at least five medics who was injured by the feds last night. They are clearly going after us incredibly intentionally, and they are using weapons that aren’t designed to be shot at people to shot us with. There was absolutely no reason for them to view me as a threat. I wasn’t yelling, I wasn’t being aggressive, I wasn’t doing anything threatening. I was standing off to the side on the sidewalk with some journalists holding a water bottle in my hand.

It was terrifying and scary. But here’s the thing. Portland is kicking these fuckers ass right now. Since the feds arrived the protests have grown to almost 30x the size they were when the feds showed up. They come out with batons and pepper-balls and portlanders show up with hundreds of shields and form phalanxes and hold the line. They launch tear gas and people scoop the cans up with lacrosse sticks and toss them back at the feds while other people blow the gas back at them with leaf blowers and industrial fans. Gas masks and respirators are out of stock at every major supplier on the west coast (I got this from a hardware store owner in town who is trying to help supply demonstrators and is having to source his respirators from a company in Ohio because so many Portlanders are buying them up). They put snipers on the roof and they get chased down with flashlights and lasers. We are having ABSOLUTELY NONE of their white supremacist fascist bullshit. The RiotRibs people fire up the grills around 6 every night and they keep cooking til 4 or 5 AM and when the tear gas comes out they just put on respirators and keep on grilling, bumping old-school hip hop tunes on a portable sound system. The Feds are in way over their heads. There are 114 of them, and there are thousands and thousands of us. Every night I’ve been out they’ve escalated the scale and ferocity of their attacks and Portland just keeps showing up harder and harder, and staying clear and loud on the message that we are out here because Black Lives Matter. Despite all the violence and injuries and pain, people aren’t scared. We believe that we will win, and there is solace in that certainty.

What scares me is these officers have no clue what they’re doing. They are highly trained Border Patrol tactical troops and US Marshals, but most of them don’t have protest training, and most of them haven’t been trained on the weapons they’re being asked to use either (this is per an internal DHS Memo by the way, not just random hearsay). Many of them at any given time are carrying live-round AR-15s. It makes them unpredictable, not because they are being clever but because they are doing shit that is illogical and makes no tactical sense. They’re shooting weapons designed to explode overheard directly at people’s chests. They’re firing into crowds with things they can’t aim. And they’re doing it to black youth, and vets, and moms, and clergy members, and reporters, and medics. The first night I was there a vet at the fence around the courthouse went into a PTSD-induced catatonic attack when the first flashbang went off. Another medic and I ran to him and when we realized we couldn’t move him (he was a big dude and clenched up tight in a ball), we tried to cover him with our bodies as the tear gas was going off. The feds response was to toss 7 more grenades over the fence directly at us, even though we were clearly no threat to them. All seven exploded within five feet of me. Later that evening I was treating a young woman who’d been hit in the hand with a canister. She told me she’d been hit in the head with a baton round two days before but came back because “what they don’t understand is I’m ready to die for this shit. It’s been too long, we’re not letting it go away this time. I don’t want to die, but if these fuckers kill me I’ll know I died for something that fucking matters.” It made me cry and she and I held each other for a minute as we moved out of the advancing cloud of tear gas. Despite Chad Wolfe’s claim in a recent press conference that there were “no reports of injuries to demonstrators” hundreds of people each night are requiring medical care for gas, and dozens more for impact and burn injuries. But we keep coming. I’ve been treating anywhere from 15-50 people a night and I’m just one of the dozens of medics out here. You can taste the tear gas as soon as you get within a few blocks of the courthouse, it’s been used so much it’s just lingering in the air now. (Someone out there with an environmental or public health degree, there is a case study here with your name on it!)

These guys are out of control, they have no clear end goal, and they’re losing. That’s a scary combo.

So what is there to do?
1) If you can show up, show up. If you’ve never been before shoot me a message and we can talk safety. But if you can’t show up on the ground (and there are a million valid reasons that may be) find another way to help. Every little bit counts.

2) Donate to orgs doing the work. Don’t Shoot Portland is the best social justice group in town, the ACLU and Rosehips Medic collective are both doing powerful work. I’m also happy to take money directly and I’ll make sure it goes to medical supplies and protective gear for folks on the ground. We’re going through N95s and respirator filters faster than we can keep up with, and we keep running out of stuff like gauze and cold packs. (The first night I was here I actually ran out of supplies in my med bag, which has never happened to me before in the hundred some odd protests I’ve been to). My venmo is Nate-Cohen-3.

3) Call your congressional reps. The city of Portland gov isn’t super useful at the mo, as the feds are just ignoring them, but call your congresspeople and senators and beg them to do something before these fuckers kill someone. The Oregon Congressional Delegation is working on various tactics to try and get it to stop, ask your reps to support whatever Senator Ron Wyden Senator Jeff Merkley and Congressmen Earl Blumenauer are working on.

4) Find Black-led orgs and businesses in your area and support them however you can. The big media narrative at the moment has been about the federal occupation, but on the ground for us this fight has always and continues to be a fight for Black Lives.

I’m gonna be out of commission for a couple days probably, but I’m gonna be back out as soon as I can. I’m so fucking proud of this city I could weep. Stay together stay tight, we’ll do this every night. Black Lives Matter.

****************
GWB famously said “We fight them over there, so we don’t have to fight them over here.” Well, now they are fighting the people, who are non-compliant, over here. Overseas, the culture of obedience called it “pacification.” The object is always the same, to render people subservient. Why is that important? Because some people are unable to do for themselves and that scares them.