Occasioned by the drop in expected revenue as a result of the pandemic.


So far sales tax collections have fallen less than expected. What I want to address is that for about six years I have heard the excuse from the County Administrator, Alan Ours, that the reason record keeping, code enforcement and ordinance revisions are lagging is because the staff had to be reduced in response to the crash of 2008.

Consequently, it was not a surprise when he announced that, in response to COVID-19, he had put a freeze on hiring and recommended that, to “save” about $450,000 in the next sixty days, employees should be furloughed and forfeit 48 hours of pay. Why? Because we would not want the playing fields, which have not been used for three months, to become unkempt.

Of course, public safety employees, who have used up much overtime patroling the beaches, will not be furloughed. As the IACP report tells us:
“The Uniformed Patrol Division maintains social order through deterrent presence, enforcement of laws, timely response for calls for service, preliminary investigation of criminal offenses, apprehension of offenders and enforcement of traffic laws.“

“Social order” is Ours sole objective. Monitoring he likes. That’s why he’s had all sorts of electronic equipment installed on the second floor of the Pate building after I started recording workshops. Hiring and directing employees is not his forte. Indeed, the Administrator is unable to provide direction to the BOC, either. That is evident from the agendas he puts together—-items to be rubber stamped or not.

I can see why Ours prefers to rely on consultants, rather than hiring permanent employees. The Director of Community Development and the various Deputy Administrators are all duds. And he does not know how to help them get better.

He has fathered ten children, so there is that. 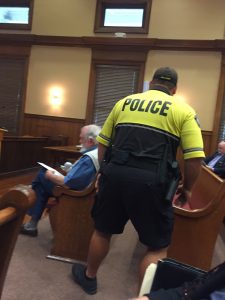 Here’s an example of “keeping social order” by the uniformed police.

Ah, yes, I almost forgot. Another main reason for a revenue shortfall is the closing of the courts resulting in a shortage of fines and fees.