I’ve been meaning to write it down. Last summer, early August, perhaps, I came down with a gastro-intestinal bug. Lots of diarrea, an episode of chills that was followed by an AFib event, coughing and shortness of breath. Having looked on the internet, I concluded that perhaps a visit to the doctor was in order. Also, I’d had one of those aching right arm events, which usually goes away when I take a deep breath. So, I went to the walk-in clinic on the island where the doctor on call took blood pressure and heart rate and decided I needed to visit a cardiologist on the mainland. The clinic made an appointment for the next day.

By the time we went to the appointment, just walking from the bedroom to the kitchen resulted in shortness of breath. So, we took the trasnport chair along and Puddy wheeled me into the hospital/medical offices building. The cardiologist ordered an EKG, blood test and recorded the heart rate. I told him I had Atrial Fibrillation. He said “How do you know? Has it been diagnosed?” I told him I could feel it from time to time. I did not tell him I felt sudden pain in my right arm from time to time.

The cardiologist came back to tell me I have leaky valves and an enlarged heart and that could be fixed with surgery. I told him that was not happening. So, he wrote me a handful of prescriptions and told me to make an appointment for next August. Unfortunately, when I had the scab on my nose looked at, that turned out to be a deep basal carcinoma and in the middle of surgery, the doctor wanted to do the rest in the hospital under anesthesia and that required a sign-off from the cardiologist, who insisted that first my heart rate would have to be lowered. Then he told me a basal carcinoma is elective surgery, shook my hand and gave me his cold. So, I had a runny nose while the surgery healed. 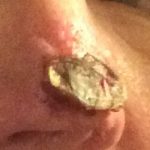 After the main scab came off.

Two days later. The patch was, at first, a little puffy. Now it has a crust of sorts. Some of the scab just fell off.