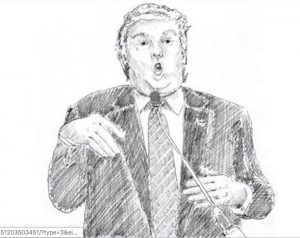 Andrew Sullivan writes well. However, he’s a bit of an authoritarian and cannot give up the idea that, in considering Trump, there is still a there there. That the Dude is loony is inconceivable. Nevertheless, it has been pretty well established that Donald John Trump is a narcissist and suffers from a permanent cognitive disability that is very likely endemic—i.e.he was born that way. So, there are no rational policies being held. Trump is a bundle of irrationalities. The only question now, IMHO, is how so many people were/are deceived into thinking he’s a rational person and the answer I propose is that, much like illiterate people inventing “work-arounds,“ some of which involve recruiting unwitting helpers, the narcissist relies on mimicry to disguise that there is no there there. Close observation shows that when he’s with miners, he acts like a miner; when he’s with teens, he acts like a teen; when he is contradicted, he becomes irate. Actually, it was that interaction with the handicapped reporter, whose handicap he mimicked even as he scoffed the man’s profession, which provided the best evidence of how he responds to prompts without thinking. There are no principles nor policies. Trump is perceived as erratic because he is surrounded by many people with different agendas and his attention keeps shifting. Imagine being in front of a set of fun house mirrors each of which distorts your image differently. Trump sees other people as a self he does not recognize. You cannot really call what he does “projection,” because there is no self to project. Perhaps he is the quintessential hollow man.