Plumbroke on Saint Simons Island–where the tree canopy disappears under the direction of the former chair of the Planning Commission.
No need to blame the utility. A proper sewer is not even planned. Instead, each McMansion will rely on a grinder pump that shuts down whenever the electricity fails.

About midway of the site, note the failure to protect the roots of the few remaining trees from compression by heavy machinery.

For some reason, five lawyers could not find evidence the road laid out in 1940 was ever used. Yet, in 1993 there was a house. Maybe the residents did not have a car?

At the north end of the Peterson subdivision a pubic park was planned overlooking the marsh and Dunbar Creek. Plumbroke Park at the edge of the marsh. That is how subdivisions (Oglethorpe Park, Wesley Oaks, Kelvin Grove, Brunswick Villa) were typically laid out in the 1940s.

“Progress” seems to be spelled “regress” in the Golden Isles.
But then, as I have noted before, develop is a synonym for destroy. 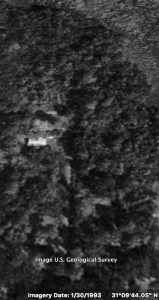 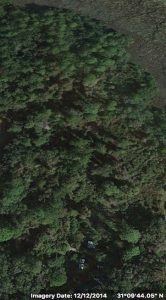 For some reason that the barrier island depend on the maritime forests to be abchored has not registered. Nor has it registered that the function of trees in a swamp or high ground water area is to transpire water from the ground up into the atmosphere and constitute a major component of the hydrologic cycle. Their appearance (pretty or ugly) is irrelevant.