The first reason is that the official bodies charged with protection, the Shore Protection Committee (SPC) and the Coastal Marshlands Protection Committee (CMPC) are being serviced by the staff of the Coastal Resources Division (CRD) of the Department of Natural Resources (DNR) and the CRD is the marketing arm of the DNR. That is, their mission is to promote industry and commerce. Which is why they issue permissions such as the following:

While the applicants just wanted a permit to repair a walkway over their marsh, CRD told them to apply for a license to operate a boat and catch shrimp. In addition, the applicants are prohibited from discriminating “against any person.”

In a prior paragraph of this LOP, issued on behalf of the Governor by the head of the DNR, the applicants are given to understand that the ownership of their land is in question.

And, by accepting the revocable license, the applicants wave their right to privacy!

All just to repair a wooden walk? Maybe somebody pulled the wrong form letter out of the file for the Commissioner to sign. If it were to grant license to construct, for example, a groin on the beach, the reference to public access and rights would be entirely appropriate. But, one would want to see it accompanied by a bond of money to insure all the conditions are complied with.

Maybe the people at the CRD are just incompetent. After all, where the applicants just wanted to replace some boards on the walk, the LOP references a bridge. And the hammock is transformed into an upland when, in fact, the elevation maps for the area tell us that the treed area lies no higher than the rest of the marsh (three to four feet above sea level). Which means that at any normal high tide the land is under a foot or two of water. Oak trees, by the way, do not seem to mind a twice daily submersion of their roots.

This is what they asked for:

And this is what they got: 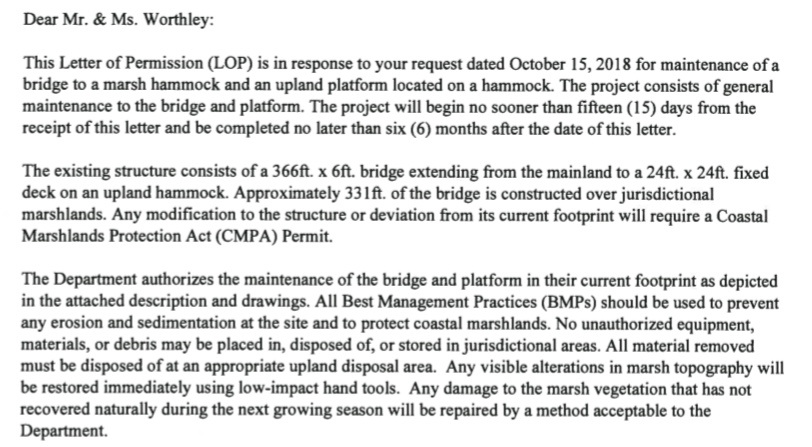 Note that the initial communication in October is in response to a “request” from CRD staff and then, after getting more plans several months later, the staff escalates the walk to a bridge and the hammock to an upland. One might suspect an effort to generate more work for an architect in the interest of economic development.

In any event, nowhere is there evidence of environmental protection. Indeed, since close inspection of the area on aerial maps shows that the ruts supposedly left by Georgia Power in 2003 still have not healed, the required reconstruction of damaged marsh after one year should have been replaced by a total prohibition of heavy equipment in the marsh. If work cannot be done by people on foot, it should not be done.

But, what work is to be done? The applicant states “the structure is in good shape and used regularly.” So, why did the CRD staff request that he apply for a permit?

Has the issuance of permits degenerated into a revenue generating enterprise? If so, “saints preserve us.” They’re destroying the marshes to make us some money. Talk about pimping the environment.