Sea Island Before and After

Is it possible to call it encroachment when, for all intents and purposes, the “highland” that was supposed to be building lot seven has been mostly washed away by the tides? 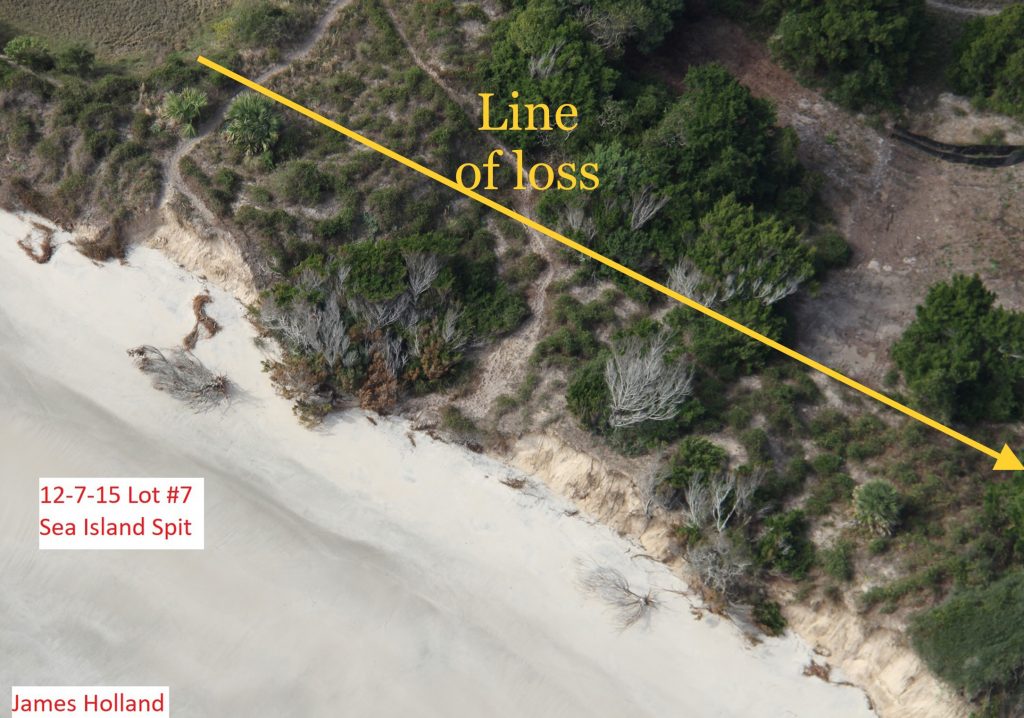 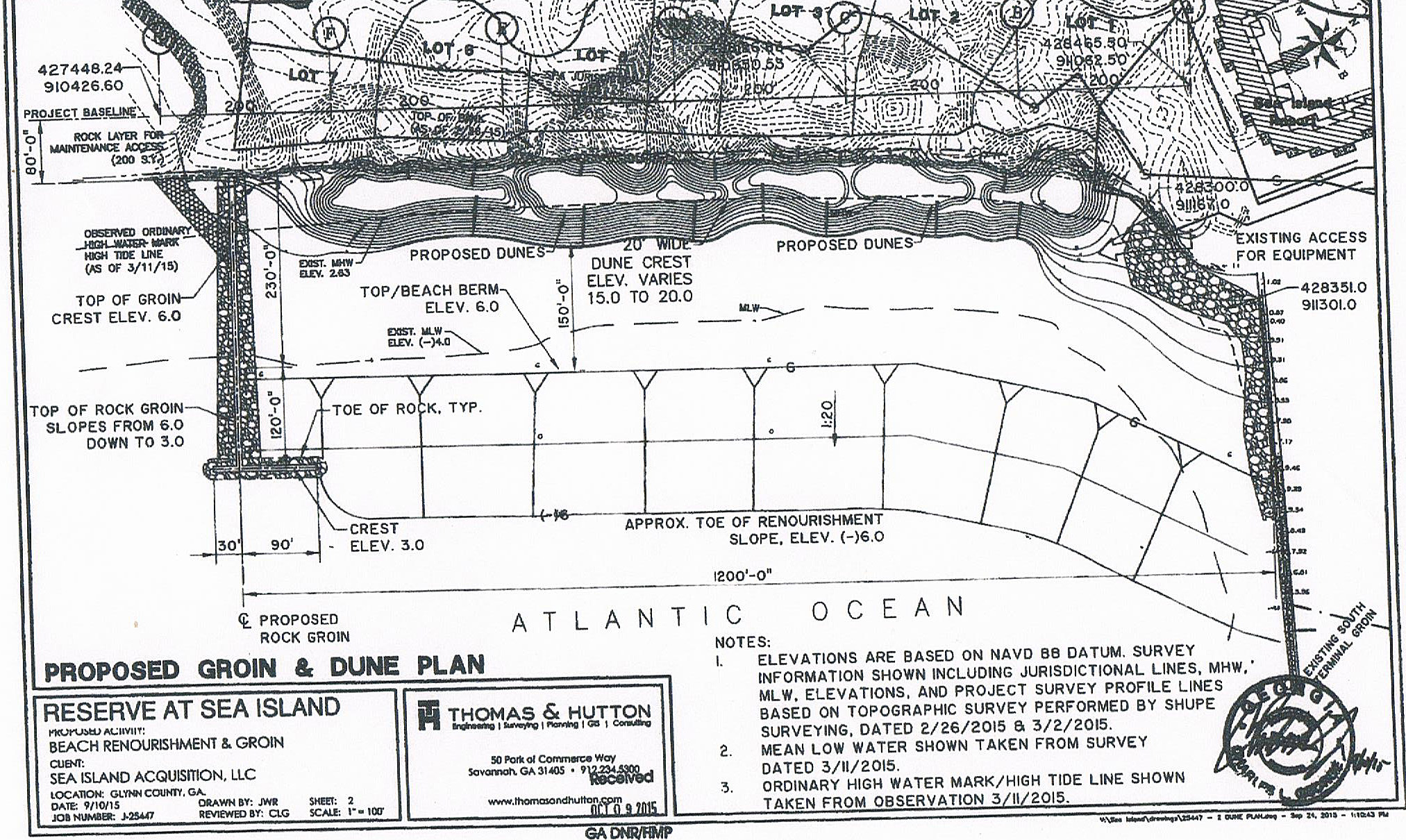 At one time, before they started messing around, there was one vegetated dune that was estimated to be 20′ above sea level. But, the horizontal dimensions of that were very minimal, perhaps not enough to construct a house. Anyway, clearing the land for the road, the viewing platforms and the designation of individual lots has resulted in erosion to the west of the erosion caused by the intrusion of the ocean on the east. Much has happened in the three years since the survey, based on data collected on March 11, 2015, was done.

That day, the high tide was at 6.23’ and the low tide at 0.01’  So, when this plan suggests that the beach is going to be raised six feet and dunes are going to be built to between nine and fourteen feet above that, it is totally unrealistic. 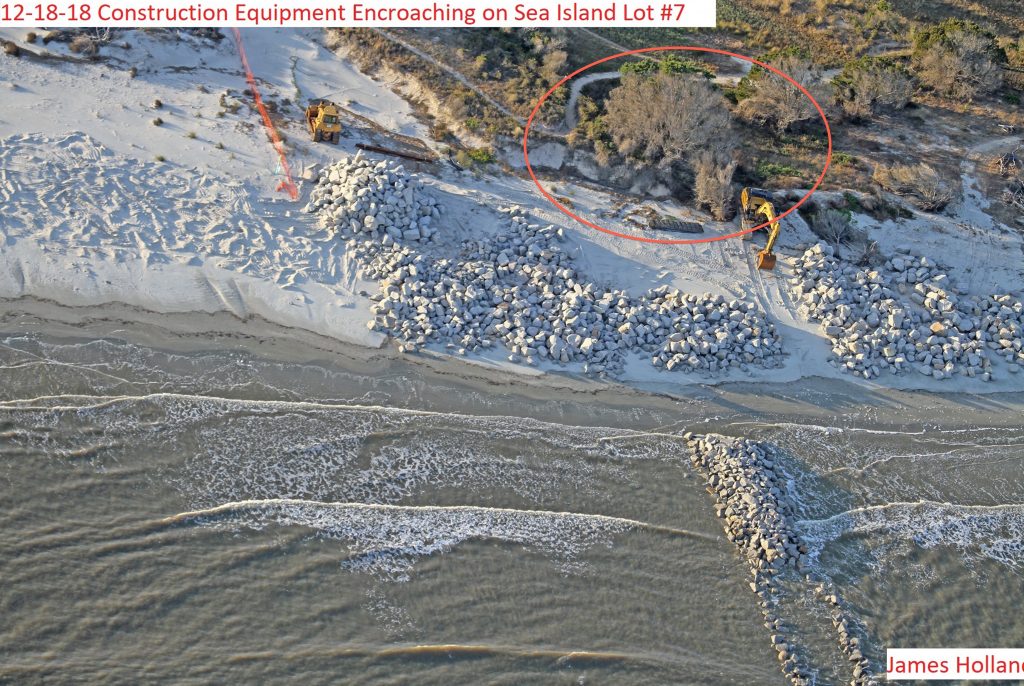 If they think those piles of rock on the beach are going to provide a base for dunes, they’ve got another think coming. The rock piles will promote erosion with every o’ertopping tide. Just look at Gould’s Inlet where some of the piled rock continues to promote erosion for the simple reason that plants, which capture and hold the sand, cannot grow there. The new island is growing on the former sandbar because plants got a footing.
One of the things that keeps being ignored on the ocean front is the quantity of sand that is moved not by water, but by wind. That is how the new dunes on East Beach gor built. From time to time, high tides take out a little of the dune face to expose, what some of our pictures from the Spit showed, the deep roots of the native vines. After a while, the wind blows the sand back and the graduated bank is restored.

What was present in 2016 is now gone. Those bushes in the circled areas are not the same.  See the line of loss above. 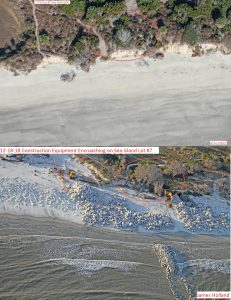 Agents for the state of Georgia in the coastal Resources Division claim jurisdiction within so many feet of the shore and the coastal marshlands. That would have included most of what was depicted in James Holland’s photographs. 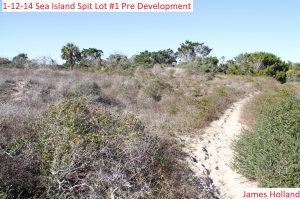 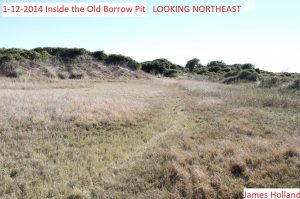 Jurisdiction merely means that the state asserts a right to issue rules and regulations on how land is to be used, even though it does not claim to own that land, because of its sovereign authority and responsibility to provide for health, welfare and safety.
What I would argue is that as the land is eroded and the tide washes across the land, the affected land comes into the ownership of the state. This position is being by contested by SIA when it registers the beach as if it belonged to PROPCO I LLC and when DeLoache purchases those underwater lots south of Myrtle Street.
CRD holds that its jurisdictional determinations are only good for a year because the shore is dynamic. It is has not set up a claim to the newly underwater lands. Nor, to my knowledge, has the division drawn a new jurisdictional line to take the erosion into account.
What I object to about the profect at hand is that the DNR is letting a private corporation deposit granite rubble and pump sand onto public lands–behavior which the private corporation will then claim as evidence of ownership. 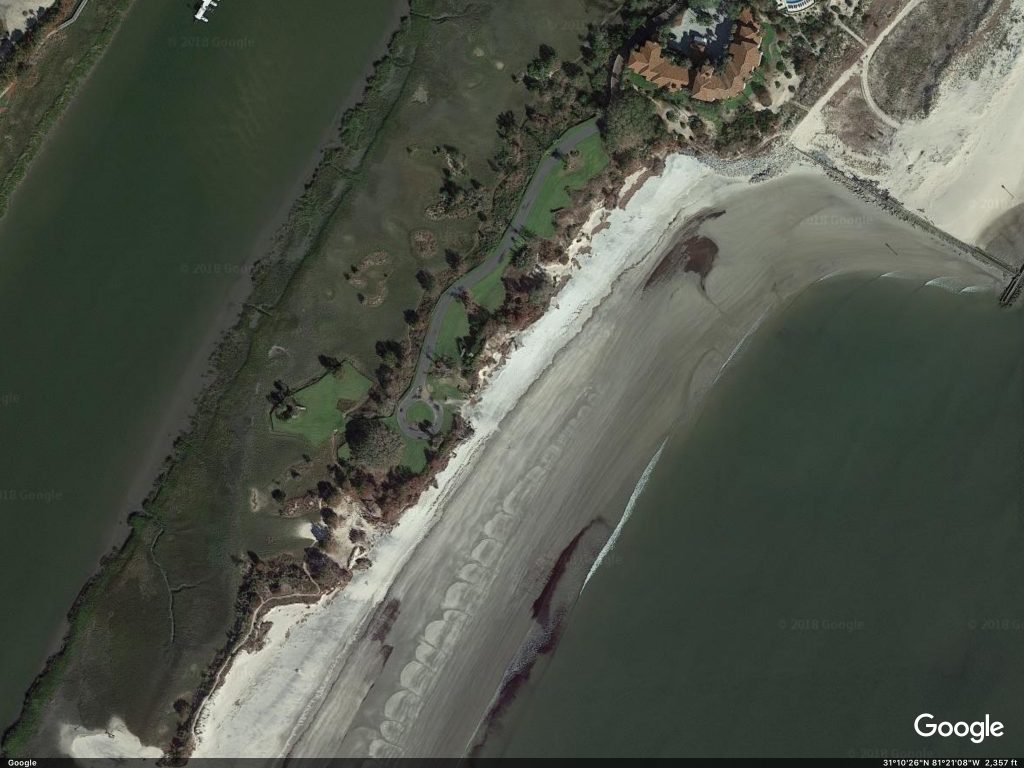 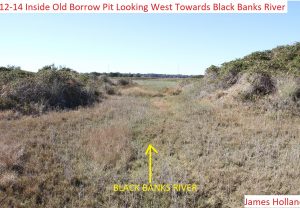 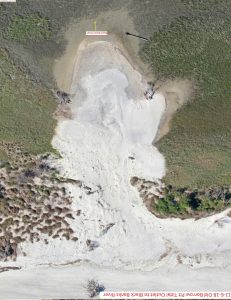 The state agency has not even exacted a lease for the subject ocean bottom that is being disturbed. Moreover, while a property owner might have a right to secure his/her land from erosion, the activities of the Cloister resort and their associates in SIA have caused the erosion — i.e. their own hardship–and that, IMHO vitiates their claim to restore what has been lost. Excavating a borrow pit and lacing the dunes with riding trails has had predictable results. 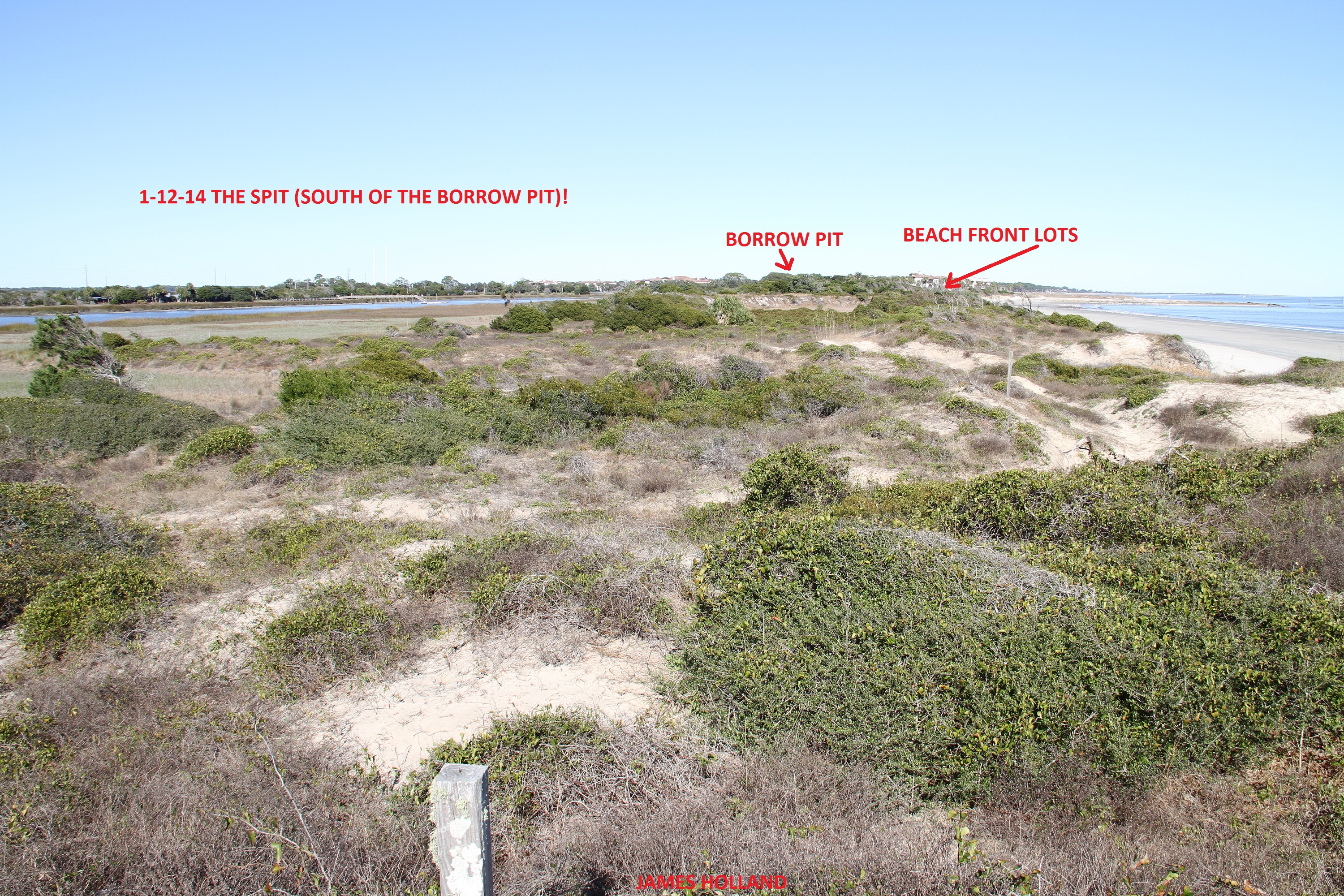 I do not think the environmentalists harping on egg-laying turtles and migrating birds helped the case much. The issue is not that wildlife is being deprived, but that the citizens of Georgia are having their lands, including the beaches, given to a profit-oriented enterprise for no good reason.
I cannot get excited about them leaving machinery unattended on beach and shore that should not be messed with at all.
Lot #7 has mostly washed away. The sand under the rock piles is also going to wash away. It is shocking that someone seems to think they can build sand dunes by piling up rocks. All they have to do is look at the old groin. While it has sunk, it has not been covered with sand. It is a dead zone.q

N.B. The machines are parked on the beach, public land, while the public is being excluded.  It is not an emergency and so violates beach access regulations. But, somebody has to complain. They’re trying to steal our land, ma. 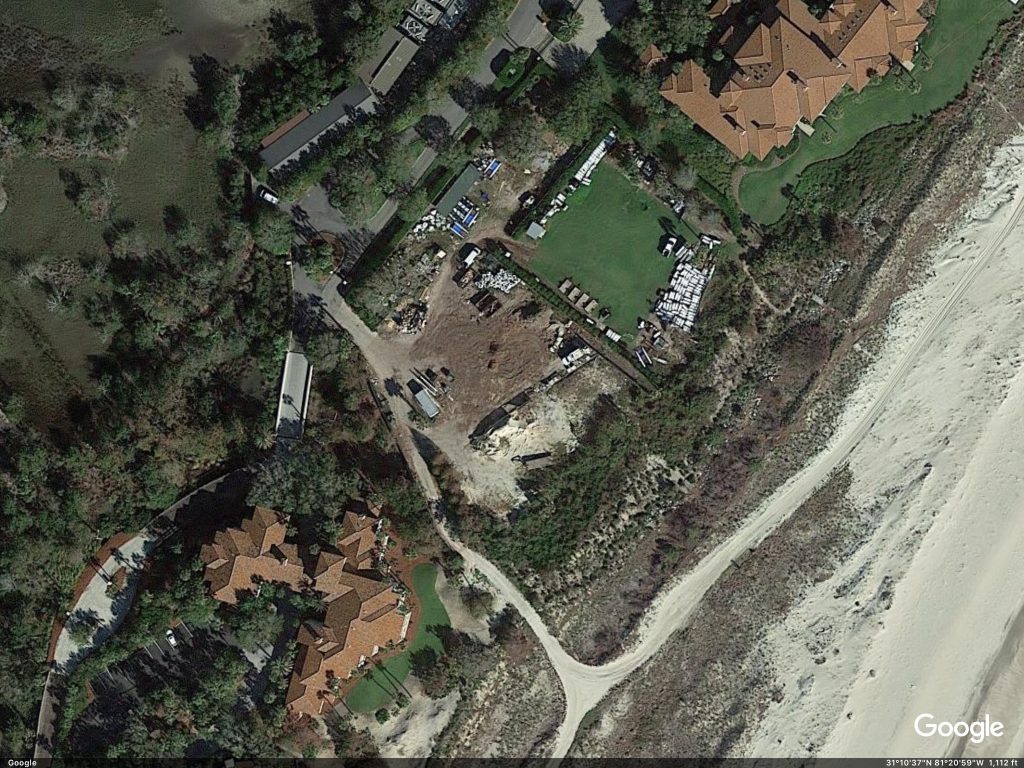