Why is the state of Georgia letting an Anschutz corporation, headquartered in arid Colorado, litter our Atlantic shore with granite rubble and disrupt the surf with yet another rock pile, aka groin? Is it because anyone willing to waste money in Georgia is welcome? Are we that hard up?

That Georgia’s Department of Natural Resources, mostly made up of contracting folk, is keen to send granite rubble from the mountains to the shore, as if that’s what our highways were designed for, seems obvious. That granite won’t hold back the ocean and, instead, augment the water’s force until the rubble has been reduced to sand, has been obvious, but is perhaps too complicated for wheelers and dealers to understand. Time is a puzzlement.

The Anschutz people claim a right to protect the land they rescued out of bankruptcy from eroding into the sea. The law gives them that. The problem is that, once the land has sunk under the surf, it reverts to public ownership, not just the jurisdiction (where the law applies) of the state. Filing amended titles with the Clerk of the Superior Court does not validate a title or claim to ownership, unless the State of Georgia fails to challenge the false claim.

What the Anschutz people seem not to understand is that, just as the Grand Canyon cannot be refilled, what the Atlantic Ocean has reclaimed cannot be effectively replaced. If the land was to be protected from erosion by water and wind, the time to do so was three decades ago, before the rubble dumping began. Time, in addition to being a puzzlement, is also of the essence.

Dunes cannot be replaced once the vegetation that held them has disappeared into the surf. Rock piles cannot form a base. 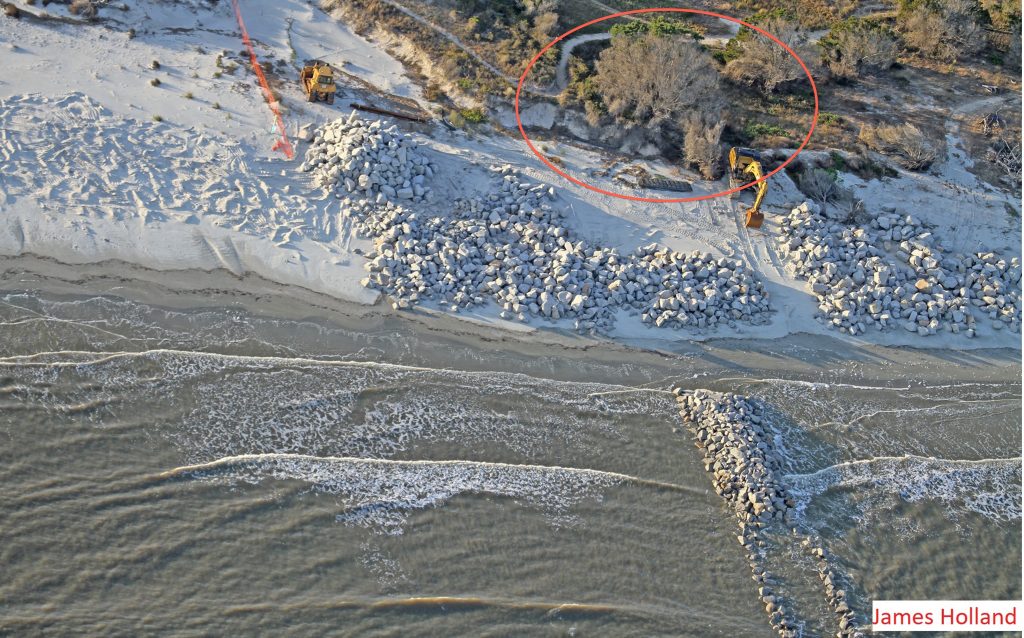 If the would-be erosion preventers had been paying attention to Mother Natures endeavors on and off East Beach on Saint Simons Island, they would know that sand dunes are made up of layers of sand and clay, where the clay holds the moisture plants need to grow and the sand keeps the clay from being washed away and then the plants hold the dune in place. It is a dynamic process, but it is also a co-ordinated process. And granite rubble has no place in it.

It seems instructive that, upon occasion, a large timber or even a whole tree will wash up on the beach and almost inevitably get incorporated into the dunes. What differentiates these giants from the granite is that they are organic and contribute nutrients to nourish the dune vegetation. If granite is to support life, it has to be eroded first. Time is of the essence.

One would like think that people who know that the days of their lives are numbered would be more careful and not waste their time.

There is some thought that, if Mother Nature has her way, Sea Island will calve in the spring and we will have a new island, along with the whales, to name and protect from man’s predation.