Among other things, it provides vitamins and fiber to the diet and reduces blood pressure. 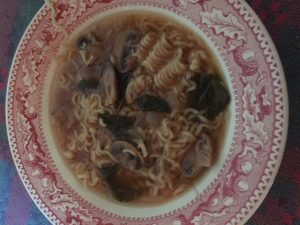 Not that anyone should care, but I have long had an interest in Africa, whence the roselle originates. In the Austrian Alps during the war there was another mother with a small child whose husband, a professor of African languages, had also been drafted for military service. He was not captured and returned soon after the war ended and helped my mother get her stuff together when we were expelled. The couple and their daughter returned to Hamburg and his university position and the families kept in touch.

When I was sixteen, the professor and his wife proposed to go on an expedition to Africa to collect more language data (he wrote up grammars for languages that were only spoken). My mother offered to host their daughter in New York for a year while they were in Africa. So, we made elaborate plans for me to visit my father for a couple of weeks, then meet up with my mother for a tour of Italy and France to end up in Paris where the professor would deliver the daughter and we would embark with her on a French liner back to New York. I had travelled by myself on the Italian Line to Hamburg.

The daughter somewhat followed in her father’s academic footsteps and eventually set up a leather Museum. Mother and daughter visited us here on St. Simons in the early ’90s. We took them to the Plantation Inn which was on Harrington Lane where Vassa Cate has now plopped his development.

No doubt my interest in linguistics was prompted by the professor trying to teach me to click over lunch. During the summer between my Junior and Senior year in college, I took a linguistics course at Georgetown University and decided, on that basis, that linguistics was going nowhere in the effort of trying to reduce all language to a common pattern. The guy who wrote the book decided that, as well, which is why he now goes around lecturing on social issues–that’s Noam Chomsky

Although I minored in Russian studies, I wrote my senior honors thesis on the Constitution of Senegal, one of the first countries to gain independence from being a colony of France. Since we lived in D.C. By then, I was able to go to the embassy to request a copy of their Constitution. They had to request one from home. I do not have any papers or books from that time because everything got burned up in the house fire in 1974.

I suppose it was my interest in things African which spurred my effort to help the African American community in Gainesville prevent their central city neighborhood from being razed and put to commercial uses. I forced the City to conduct a survey which certified the area qualified as a National Historic District, organized the Pleasant Street Historic Society (which is still going strong) and we got the federal designation. If the Gulla were smart, they would pick this neighborhood as the terminus of their cultural trail, because most of the free black men and women who settled there and founded the City came from South Carolina.
Anyway, it is all connected. Joshua brought us the Roselle because he’s aware of my interest.
So, eat your greens.