Once upon a time, it was suggested that Glynn County, as guardian of the Golden Isles of Georgia, adopt a fifty foot building setback from the high water line in order to preserve the shoreline of the islands in its natural vegetated state. Of course, the electeds would do no such thing, since such regulation might interfere with how many dollars their land speculating buddies could extract from the rubes they can still entice to buy near underwater lots.

However, it might well not have made any difference because the regulatory geniuses at the Coastal Resources Division of the Dapetment of Natural Resources, whose mission is to preserve resources for future exploitation (not unlike putting up strawberry preserves for Christmas dinner), still do not know where marshland begins and ends. Perhaps it depends on whether their feet get wet when they stick in their little flags. Perhaps the CRD cannot afford to hire trained botanists and that accounts for why they cannot tell the difference between a swamp, a saltwater marsh, a freshwater marsh and seasonal wetlands needed by frogs and toads to reproduce.

Whatever the reason, James Holland still tries to inform and even sends periodic pictures to indicate where they have gone wrong.

Remember you can click on the thumbnail to embiggen the images. This one might raise the question why marsh plants should not be mown and the answer is quite simple. While grasses, having evolved to be cropped on a regular basis, grow denser as a result of being cut, marsh plants just die off. It also demonstrates that substantial trees grow in the marsh. Indeed, because of the detritus they attract and drop, the elevation of the land around them is increased, ever so slowly. If you want to prevent erosion, do not cut down the trees.

See what I mean about the trees?
Given the haphazard placement of markers, one has to wonder if the regulators even know what “jurisdiction” means. Perhaps they think it means “this is the spot where we give permission to do stupid stuff,” such as trim trees to frame a view.

While palms are technically grasses and not trees, they are often imported and stuck into the ground wherever it seems convenient to demarkate where the highland starts. But, if one happens to have established itself naturally in the marsh, it too is likely to fall to the landscaper’s saw.

Perhaps the regulators should not be faulted for being bereft of James Holland’s eagle eye that lets him spot an emerging ox-eye amid the grasses, rushes and sedges. Perhaps the DNR is like the EPA, an industrial and corporate shield against tree huggers and animal lovers. After all, was not the EPA set up by Nixon as a sop and isn’t honest Pruitt bringing it back to its roots? Apparently, America is great when chaos and wreckage reign.

Oh, and deception. There are many forms of deception. Take this aerial view of the Yacht Club subdivision, which was authorized during a hiatus of the state’s marsh buffer standards. The tree canopy looks nice. 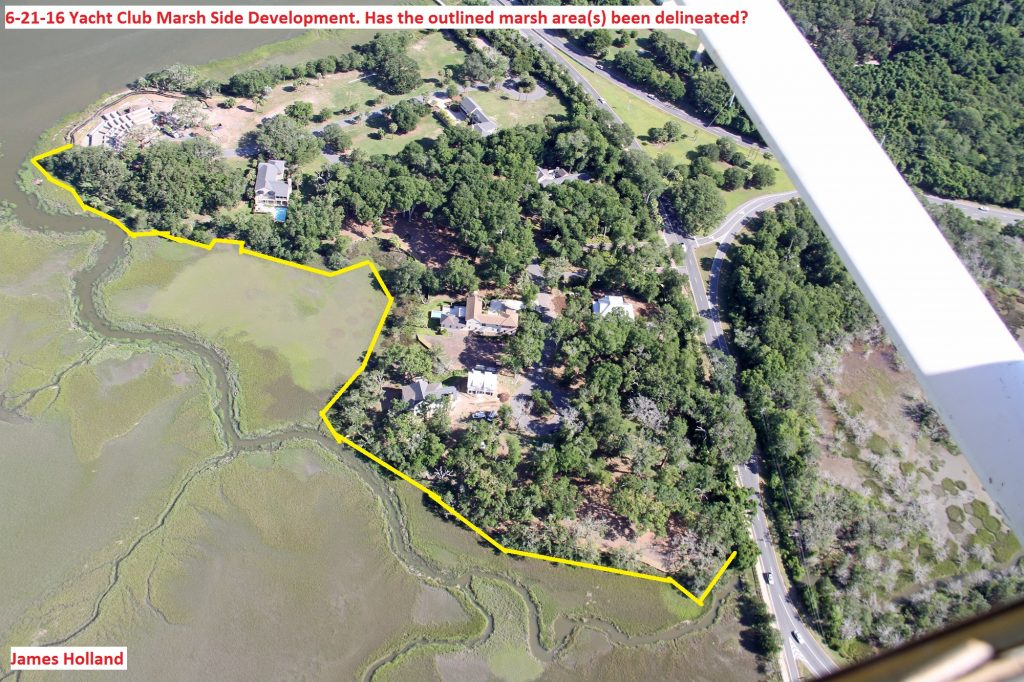 But, there is no effective setback from the marsh to protect water quality and aquatic life (the ostensible purpose of buffers) because the speculators, wanting to maximize their profit, laid out 42 tiny lots. So, the gas station owner from Pittsburgh had to buy three lots to build his monster on the point and out into the marsh. (This photo was taken before the excrescence was built and the canopy was still significant.)
Now, as more houses are being built, the canopy is stripped and while the owners have less worry about limbs coming through the roof, when the next tropical storm, or even a hurricane sweeps through, they should not be surprised if their mini mansions are gone with the wind. At least they are close to the Causeway and can evacuate early, even if they have to do it on foot.