Tell me this is not a scam. Eleven years ago, the citizens of Glynn County approved an additional penny in sales taxes to collect almost one hundred million dollars over five years.

Forty million of that hundred was pledged to rehabilitate aging sewer and water systems. Sixteen million was actually spent, half of that on new south of the river facilities, which have almost no users. In the mean time, the water and sewer systems for both the City of Brunswick and Glynn County have been palmed off to a new Commission, along with a forty million dollar debt. $41 million are still needed by the JWSC for restoration and rehabilitation, while the Glynn County Commission generously promises $13 million from a new SPLOST.

So what happened? Well, in addition to the $7 million that’s still sitting in the bank unspent, there were some other budget “adjustments.” Beach access improvements on East Beach, for example, went from $250 thousand to a mere $52 thousand for signage. And drainage costs more. 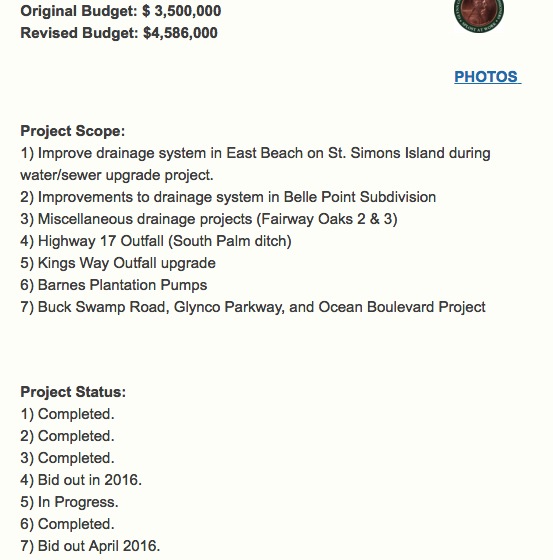 I suppose we are to ignore that the Highway 17 outfall is back on the list — this time as a bridge for a mere $1.7 million more.
Here’s the complete 2016 drainage list.

Personally, I vote “Not Another Cent” until they get off the drainage kick. What we need to do is learn to “manage” our storm water so it filters back into the ground and replenishes what we’ve been letting industrial users pump out, as much as 45 million gallons per day by Brunswick Cellulose alone.

The Glynn County Commission, having been accused in numerous “town-hall” meetings of not spending to get enough stuff done, now proposes to collect more in less amount of time. Talk about not “getting” it!

There are good reasons for having an annual budget review. One is that it lets the citizens know what’s been done and what’s going undone. Expenditures from a special fund that drag out for over a decade make it almost impossible to hold public officials to account. So, I repeat, “Not Another Cent.”