Yes, the Glynn County Commission denied a property owner’s request to “abandon” a portion of a platted street (Ocean) on Saint Simons Island, so his several incursions (by the house and a wooden deck) into the public right of way would be legitimized, giving him title to about 5000 square feet of high land for free. The County Commission did not, however, take the next step of instructing county staff to enforce our codes and protect public property rights by ordering the obstruction on that and adjoining properties to be removed. 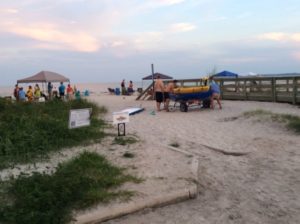 As you can see from the following images taken from the tax maps and Google and annotated by yours truly, while the public has access to the beach at Myrtle Street, the ocean would be much more accessible, if property owners hadn’t installed various impediments, such as hedges, gates, walkways and decks to discourage pedestrians. 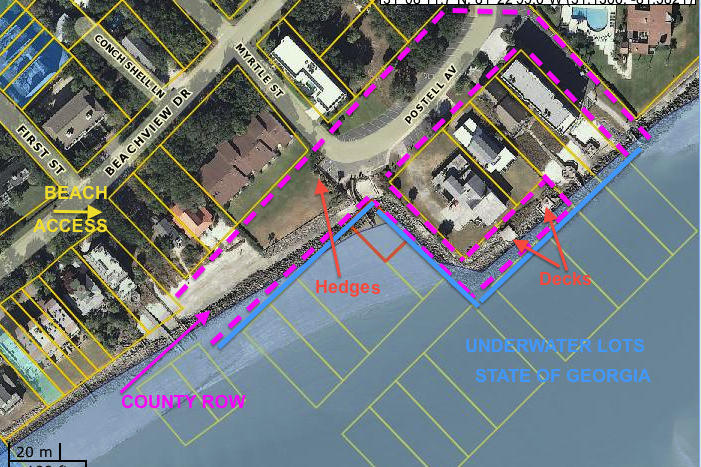 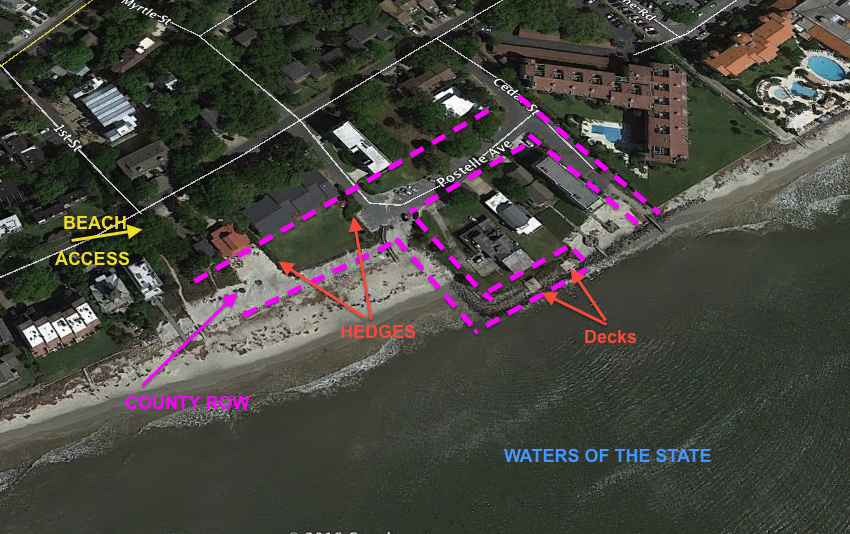 color key:
magenta = ROW
yellow = lot lines and beach access
red = obstructions
blue = water
To be fair, while some of the County Commissioners were able to rely on their own memories of the area decades ago, the supporting documentation provided by the Community Development Department to the public was obviously outdated and incorrect. And the staff recommendation that the State’s claim on the underwater lots (waters of the state) could just be referenced in a deed would achieving nothing and cloud the title to the property even more than it already is.

But Glynn County is not alone in having been lax. The demolition debris in the foreground of this picture can be charged to the County. But, when the Georgia Department of Natural Resources issued Don Gentile a letter of permission two years ago for the reconstruction of that deck, which beachgoers have to clamber around because they don’t realize they’ve got a right to walk on the grass, the DNR folk also didn’t check to validate that Gentile actually holds title to the land where the deck had been built.

These derelict park tables with benches were, presumably, installed by the County at one time. Now they just linger on the edge of the rock revetment as another impediment to the public. 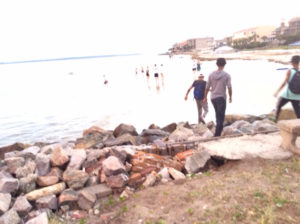 It’s not as if Glynn County had totally ignored this section of the beach. In addition to putting “no parking” signs in place, the County constructed three parking spaces for verhicles used by handicapped persons — spaces which just happen to reinforce the exclusion of the public from the right of way that used to be Railroad Street before it was renamed Postell. Why the Ocean Breeze condos were permitted to arrogate a half acre of public land and substitute turf for the natural vegetation is anybody’s guess. It’s not as if the documentation weren’t available via our extensive and expensive Geographic Information System. It’s hard to believe that our Community Development Department doesn’t know how to access the information.

Finally, let me just observe that I don’t blame people one bit for being concerned about property rights. After all, we’ve got pervasive patterns of people respecting neither private nor public property rights. We are surrounded by squatters and dumpers and the litter is plain out of sight. Landowners don’t get no respect.