It did not occur to me until recently that the pejorative “poor white trash,” might be used to make a distinction from “rich white trash.” But, given the evidence, it’s hard not to conclude that, whatever the income level, trashy behavior is a constant. Here in the Golden Isles, it’s not just the causeways and roadways and beaches that are regularly trashed by visitors and transients. While paper mills and power plants pollute air and water, our stellar tourist industry turns the land, marshes and beaches into dumps, albeit behind Potemkin-like fences, screens and walls. 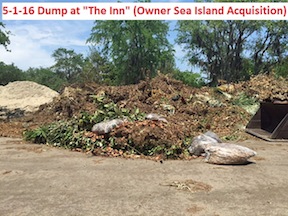 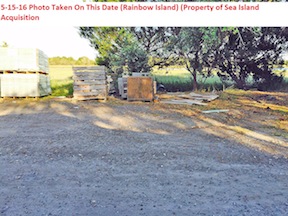 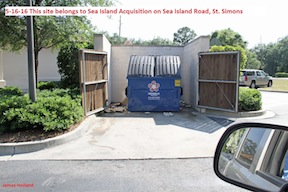 County Code Enforcement claim their hands are tied by a convoluted interpretation of private property rights.

“Complaints filed regarding allegations of the storage of materials, equipment, and several of other alleged “inoperable vehicles” on properties that are under the authority and/or control of Sea Island Acquisition LLC were investigated to the limits that current laws, ordinances, and Community Development Code Enforcement policies would allow. The allegations reported indicate that the violations take place well within private property boundaries and are not visible from established Glynn County right-of-ways. It is the policy of Code Enforcement to remain in compliance with all investigative jurisdictions and laws regarding searching on private property. Officers cannot enter on to private property to search to any location for violations; all observations are to be made from Glynn County right-of-ways. This follows the same legal policies of which police officers follow to be in compliance with State of Georgia Laws and U.S. Constitution Amendments (unless there are such laws that allow exceptions). As a result, Code Enforcement was not able to confirm legally the alleged violations. It was noted that at least one photo was submitted. However, it will have to be determined whether the photo submitted was obtained legally and whether it depicts the allegation sufficiently to justify any enforcement action.”
“However, Code Enforcement did not ignore the complaint, and contacted Sea Island Acquisition LLC‘s head of property compliance and security regarding the complaints filed. It was advised that Sea Island Acquisition LLC would address the matter of areas that they have designated for storage of outdoor landscaping equipment. It was noted that these allegations were reported to other departments and agencies which may resolve any of allegations pending their investigative policies.” 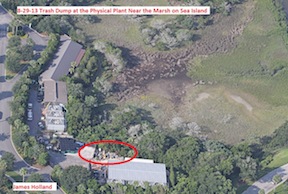 Presumably, what the “other agencies,” whose primary enforcement mechanism is the “permit to pollute,” are to address are contaminants entering the marshes and water bodies, if and when they get permission to “investigate.” 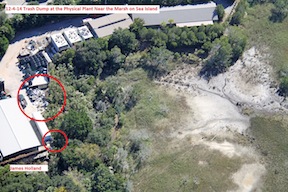 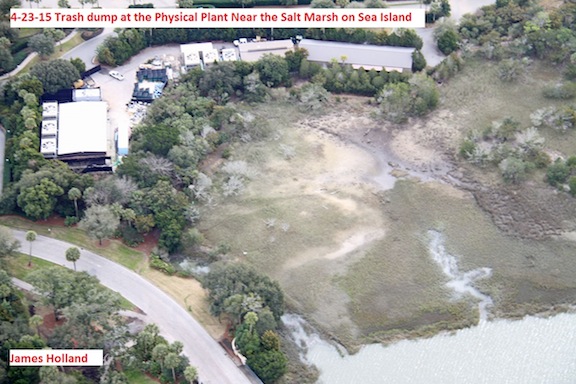 Meanwhile, the citizenry is bombarded with one more outrageous effort to turn the common wealth into private wealth with utter abandon. 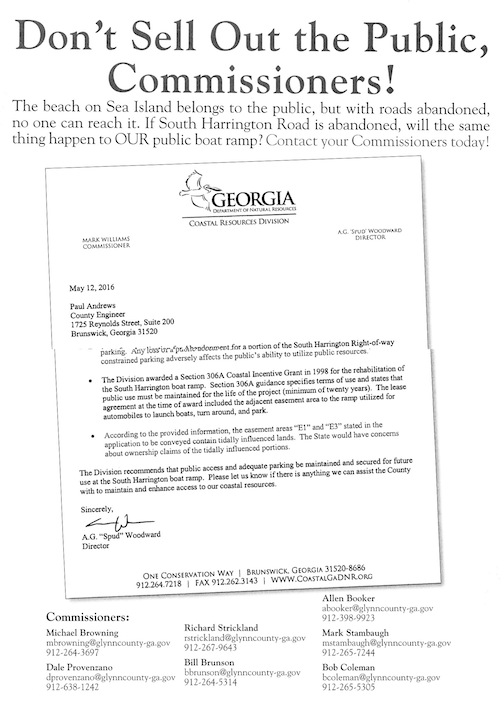 Even the state regulators are prompted to weigh in and object. Though it’s doubtful they can be relied on. The public gets short shrift. This mandated public notice about yet another shore conversion proposal arrived in the paper a week and a month late.

But, while the commercial exploitation of the public beach and dunes is not an issue in the latest permit application by Cottage 65, DNR regulations typically protect nothing because the public interest has come to be equated with dollar signs. Public health, safety and the common wealth be damned. 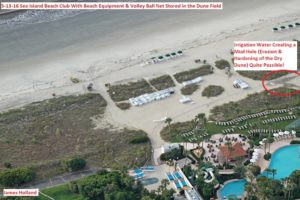 The Glynn County Commission will hold a public hearing on abandoning the eastern end of South Harrington Road this evening, May 19, 2016, starting with invocations to the deity at 6:00 PM.