It’s hard to get timely, accurate information. In the early years of the 21st Century, some group was tracking the transfer of dollars from the federal Treasury to the states, which generally showed that the majority was in the form of various kinds of insurance subsidies: mortgage insurance, housing insurance, health insurance, flood insurance, crop insurance and higher education loans. I’m not sure if that covers the water-front, but the data collection stopped, perhaps in response to objections from the insurance industries at having their transfer function exposed.

In the event, various computer crashes and program switches account for why I no longer even know where or how the information could be found. Then too, in addition to health insurance (Medicare/medicaid) being substantially reformed, the flood insurance program was overhauled by the Biggert-Waters Flood Insurance Reform Act of 2012, whose context is fairly well addressed in this report put out by the Congressional Research Service (pdf), even as other segments of the insurance/financial industry were tackled by Dodd-Frank, in conjunction with the Affordable Care Act, though that aspect of the legislation is not as well known.

According to the CRS report, the legislation signed by President Obama was over four years in the making and during that time the National Flood Insurance Program hobbled along on annual appropriations. Perhaps Congress was reluctant to deal with the short-comings revealed by Hurricanes Katrina and Rita in 2005. And, although the new law calls for the repayment of $17.5 billion to the U.S. Treasury,

Many insurance analysts believe FEMA will not be able to repay the current debt in the next 10 years.

Why? Because, when premiums for policies are increased, property owners opt out. Moreover, unless people have mortgages and the financial institutions are penalized if they don’t insist on coverage, there is no way to enforce compliance.

So, “repetitive loss properties” are a well-recognized and on-going problem.

Properties that experience repetitive flood losses, known as a “repetitive loss properties” (RLP) and “severe repetitive loss properties” (SRLP), account for a disproportionately large share of all the flood insurance claims filed and paid under the NFIP.50 Historically, it is estimated that approximately 1% of the properties insured under the NFIP have accounted for over a third of claims paid. About 1 in 10 homes that suffer repetitive flood damages have cumulative flood insurance claims that have exceeded the value of the house.51

Researchers indicate that there are at least five possible explanations for the low market penetration for flood insurance: (1) flood insurance is not seen as being worth the cost (i.e., a poor investment); (2) individuals have misperceptions about low-probability risks and lack information about the NFIP;55 (3) private insurance agents do not market NFIP policies; (4) lack of compliance with the mandatory purchase requirement or failure to ensure that property owners maintain coverage for the life of the loan; and (5) many homeowners in risky areas either do not have a mortgage or have a mortgage from a lender that does not enforce the mandatory purchase requirement.

And then there are inaccuracies, like the current designation of the western side of our eroding Sea Island Spit, as being “moderately” susceptible to flooding–i.e. in the X (SHADED) category.

Leaving potential buyers with the impression that the elevation is comparable to the commercial spine of St. Simons Island suggests that perhaps there’s a 6th reason for “low market penetration”: deception. 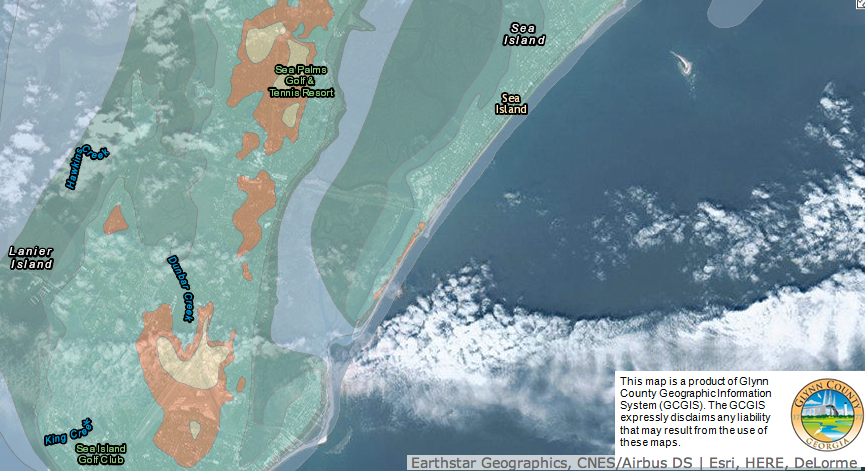 In the event, the CRS report identified a number of states as being responsible for many repeat claimants as of December 2011:
Alabama, Florida, Louisiana, Mississippi, New Jersey, New York, North Carolina, Pennsylvania, Texas and Virginia. Of course, there were/are residual effects from Hurricane Katrina and Hurricane Sandy.

So, perhaps the more recent data should not be surprising. Alabama, Florida and Texas still lead the pack in terms of paid claims for the year ending September 30, 2014. Which is about as current information as you can hope to get. 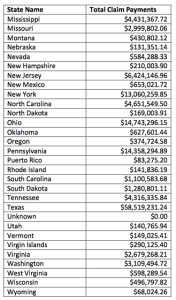 And they’re still being rewarded for not planning ahead. 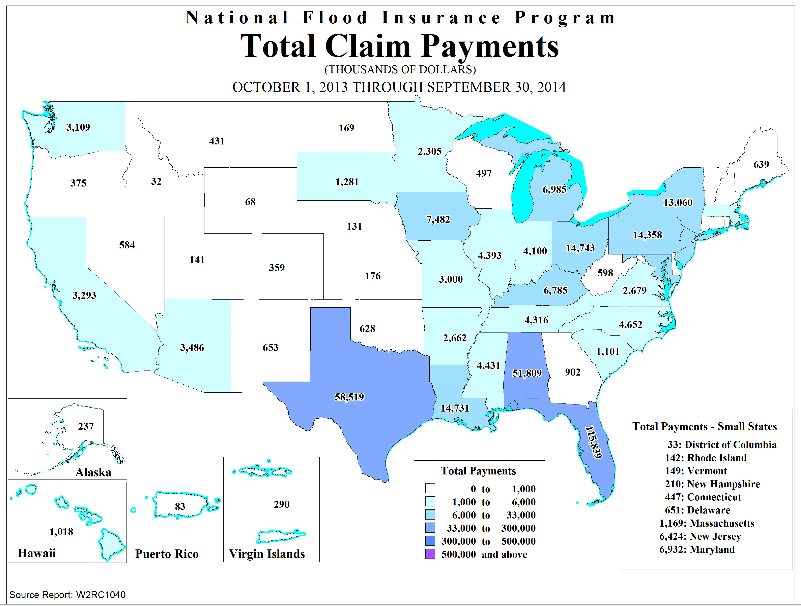