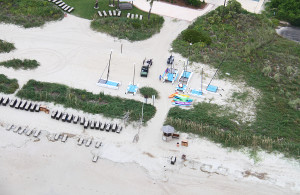 In response to a query about what had been done about commercial enterprise in the sand dunes, this was the bureaucratic response:

Surely you remember that staff has responded to your previous emails regarding these issues but you may not be aware of current efforts that staff have undertaken by working with Sea Island, as we would with any responsible person/landowner, to rectify violations of laws that fall within the purview of this program.

Though I am not providing details to you, and I am sure that you would like more, suffice it to say for me that there is work in progress that is being undertaken to resolve matters there consistent with law.

Although I try to be objective, I have to admit to finding the idea of “working with Sea Island, as we would with any responsible person/landowner” to be particularly offensive. It reminds me of a time, not so long ago, when it was routine for the police to “work with” abusive/aggressive spouses to redirect their authoritarian streaks into less destructive behavior.

We do not “work with” bank robbers or burglars (though the common excuse that an unlocked door is an invitation to come in and help oneself makes one wonder).

The arrogation of the dunes for commercial purposes is simply an unlawful taking. A “fence” may argue that he does not know the source or ownership of his wares, but the Beach Club can’t be ignorant of the fact that it is using something it doesn’t own. Squatters rights might come into play, if the DNR does not object to the abuse. However, the DNR does not have ownership rights. The DNR is a steward and stewardship never contemplates abuse. “working with” the thieves of public resources is akin to the Unjust Steward in the biblical parable feathering his own nest. Since we pay these public servants to serve as stewards, their currying of favor for future rewards is evidence of corruption, albeit hard to prove.