A topical theme seems to be how people have spent the pandemic, so far. For a homebody like me, the routine has hardly changed, except that I spend almost no time in the car going to meetings. That suitsme fine,but I do worry whether the car will start when I actually need it.
END_OF_DOCUMENT_TOKEN_TO_BE_REPLACED

So, I have been dismissed for five months, enough time for the body to replace the grafted skin with site-appropriate cells. I’m to massage it to prevent puckering. LOL “Don’t touch your nose. Touch your nose.” Consistency is not a feature of the medical profession.
END_OF_DOCUMENT_TOKEN_TO_BE_REPLACED

I’ve been meaning to write it down. Last summer, early August, perhaps, I came down with a gastro-intestinal bug. Lots of diarrea, an episode of chills that was followed by an AFib event, coughing and shortness of breath. Having looked on the internet, I concluded that perhaps a visit to the doctor was in order. Also, I’d had one of those aching right arm events, which usually goes away when I take a deep breath. So, I went to the walk-in clinic on the island where the doctor on call took blood pressure and heart rate and decided I needed to visit a cardiologist on the mainland. The clinic made an appointment for the next day.
END_OF_DOCUMENT_TOKEN_TO_BE_REPLACED

trapped-at-sea-st-simons-couple-shares-their-struggle/article_ae76ea11-e8af-5ee1-8802-73120b623f64.html
The Brunswick News story about a couple from Saint Simons who took a cruise on March 7th around the tip of South America to Valparaiso and then the Holland American Liner, Zaandam, was not permitted to dock because of COVID-19 on board and four dead people in the shipboard morgue, reminds me.
END_OF_DOCUMENT_TOKEN_TO_BE_REPLACED 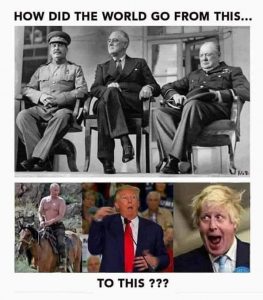 As a female looking at six males, i have to wonder who’s more likely to send other people off to die. As a survivor of the bombing of Germany, I am inclined to think that planning ahead to deal with the vagaries of man and nature is better than waiting until a lot have been deprived of life and shelter.
END_OF_DOCUMENT_TOKEN_TO_BE_REPLACED

Perhaps being reared in a Catholic environment has made me more aware of empty or meaningless refrains.

Miserere nobis comes to mind. Also, dona nobis pachem. The first, of course, is entirely consistent with the culture of commiseration which salves the spirits of those subordinated by the culture of obedience. Ah, we are all in this together. Woe is us.

Peace is not something that is handed out. Only peace prizes. Though why we want the result of pacification is beyond me. I do not want to have peace handed to me on a platter or a paten or anywhere else.

R.I.P. gets it right. We are at peace when we are dead.

What was that stinky thing on a string we used to wear around our necks?
Scapular, an “object of popular piety.” A reminder of Christian behavior for those whose memories are bad.

Catholicism also clued me in to other stuff. When did I learn about hypocrisy? It must have been at the age of 13 when the nunny bunny on our floor, the strict enforcer of beds made before morning mass and windows left open even when snow dusted the floor in the morning, forgot to lock her door and a peek revealed that she had obviously not made her bed and the nose told us the window had not been opened in weeks. Being honest, we confessed. Our monitor said nothing but her door was never left unlocked again. I guess I’ve been challenging authority for a long time. LOL

Among other things, it provides vitamins and fiber to the diet and reduces blood pressure.
END_OF_DOCUMENT_TOKEN_TO_BE_REPLACED

Perhaps it is a fail-safe option. Guaranteed to fail or not. LOL

The last thing we need is another Catholic authoritarian on the Court. Not because Catholics are subservient to the Pope in Rome, but because confession and absolution frees them from the need to exercise self-restraint. Behavior can be hit or miss and, if it goes wrong, all can be forgiven by confessing. That is not a reliable basis for moral behavior but it is what makes authoritarianism attractive to the instinct-driven.

An admission. I left off being a Catholic because the church offended my moral sense.