That’s my suggestion. Just issue a daily image of the dude photo-shopped into stock-footage of presidential endeavors and be done with it. That would be cheaper, much less disruptive and allow more time for TV and tweeting. Instead of photo ops, let’s let photo-shop do its magic!

The Coastal Regional Commission, which has been operating an
on-call coordinated transit system for rural patrons in Glynn
County, has proposed setting up a fixed route system that, in
addition to the city of Brunswick proper, would serve the
airport, Blythe Island, the colleges and the industrial parks.
END_OF_DOCUMENT_TOKEN_TO_BE_REPLACED

The lust for dominion over their fellow man seems to be greater than the lust for sex. Somehow, as a female who has had to deal with unwanted and unfriendly attention and insults and minor assaults, I don’t have a lot sympathy for males whining about being interfered with. In all cases, it is looking to the victim for an explanation/justification of domineering behavior which gives the perps a free pass. If man is created to be free, then efforts to dominate are wrong. By the way, dominion has the same root as domestic. Domesticated creatures are kept in a house, or domus. They are supposed to like it because the house keeps them safe. The question what outside the house makes them unsafe is not asked. In my lifetime women were told that if they didn’t want to get raped, they should stay home. The reality, of course, is that most women get killed in so-called “domestic” situations. There is an irony in a dominionists getting himself into a situation where he is going to be housebound and under surveillance 24 hours a day. Presumably it is preferable to winning the lottery in Shirley Jackson’s short story by that name.

You know, I don’t think we have a group designation for people who manipulate people, instead of things, to make a living. “Leisure class” is not appropriate because leisure actually refers to doing things at one’s own direction and people who work with their hands certainly do that. That manipulators of people can claim to be engaged in productive work is an illusion. Is talk their only talent? No. they’ve also got propagation. Propagation and propaganda.
END_OF_DOCUMENT_TOKEN_TO_BE_REPLACED

END_OF_DOCUMENT_TOKEN_TO_BE_REPLACED

Even Terry Dickson can’t resist taking another picture of our idyllic boat launch for the Georgia Times Union. Of course, he’s got to throw in a couple of quotes from lawyer Catts, who doesn’t seem to understand that the law is neither heaven-sent, nor self-enforcing. Who’s Catts going to call to enforce those no trespassing signs he’s threatening to put up on that quarter acre of dirt?
Glynn County paying good money for a triangle of fill on top of a bunch of stumps, probably on the advice of the County attorney, was a mistake. No reason to compound it by letting our road and the boat ramp be held hostage in another Cannon’s Point scam.

END_OF_DOCUMENT_TOKEN_TO_BE_REPLACED 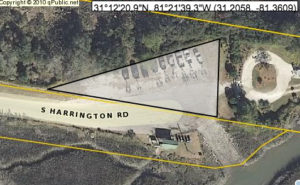 Sometimes it takes a while for things to register. Which is why our Glynn County Commission has a tendency to rush things through by voting in bulk on the “consent” agenda. Fortunately, when they’re proposing to give public property away, state law requires a public hearing, giving the public an opportunity to argue that their property needs to be retained.

Delay, unlike denial, is good. It gives thoughtful people an opportunity to collect their thoughts (and memories) and speak up, as Jingle Davis has done for today’s edition of the Brunswick News.
END_OF_DOCUMENT_TOKEN_TO_BE_REPLACED

The citizens of Glynn County dodged a bullet, so to speak, when the County Commission rejected yet another request from Mr. Gentile (the third time was not a charm) that it surrender about 5000 feet of beach front, at the end of Myrtle Street on Saint Simons Island, so that Gentile’s various intrusions (building and deck) into the public right of way would become legal.
END_OF_DOCUMENT_TOKEN_TO_BE_REPLACED

If the only way public agencies can get rid of rights they’re not using is to abandon them, then it seems reasonable to suggest that the people who deployed that term intended to send a negative message — i.e. failing to take care of public property is not a good idea.
END_OF_DOCUMENT_TOKEN_TO_BE_REPLACED

It did not occur to me until recently that the pejorative “poor white trash,” might be used to make a distinction from “rich white trash.” But, given the evidence, it’s hard not to conclude that, whatever the income level, trashy behavior is a constant. Here in the Golden Isles, it’s not just the causeways and roadways and beaches that are regularly trashed by visitors and transients. While paper mills and power plants pollute air and water, our stellar tourist industry turns the land, marshes and beaches into dumps, albeit behind Potemkin-like fences, screens and walls.
END_OF_DOCUMENT_TOKEN_TO_BE_REPLACED