From Hullaballoo:
Donald Trump is the human id on legs. That much has been plain for ages. Excess is his middle name. With multiple bankruptcies, betrayals of trust, and a coterie of shady associates, he is the last person an America with any common sense (and sense of decency) should have granted the powers of the presidency.

Water under the bridge. What now?
END_OF_DOCUMENT_TOKEN_TO_BE_REPLACED

Well, the deniers are myopic. I do not know why the author calls the denial of environmental change racists. Perhaps it is because the same myopia that leads people to focus on persons (the same or opposite to themselves) leads them to being oblivious of the natural environment. Some recognize the fish they catch and can name them; others know that deer and hogs are to hunt. But then, we sort of have to conclude that they do not see very well from the fact that they often shoot each other. Most often, if trees are even mentioned, it is the context of providing a screen, of hiding something from view. But, on the edge of the marsh bushes have to cut down so they don’t obstruct the view. GHWB talked about “the vision thing.” I do not think he meant the same thing, but I appreciate the phrase. The South is all about the vision thing, what things look like, appearances. Which are, of course, deceiving.

Hangs by a single chain

To its own clapping beat

The sun courts the snow

Cold through my cap

Whispers secrets across the bay

Terrier dances in the field

Sunlight and wind cavorting past

Only stopping to thrust

Her muzzle in the snow

For the hidden scent of grass

Standing in line
Waiting to pay
Weekly grocery shopping
Kevin’s off
Grabbing one last thing
We almost forgot
Guy queues up behind me
In a voice reserved
For meaningless chatter
About the weather
He asks
“Sooo, what’s your immigration status?”
At first
It really doesn’t register
When he asks again,
Louder this time
Confused
I look behind me
Fully expecting him to be
Asking some other poor soul
But no
He’s looking right at me
With a tight malicious smile
Of a middle school boy
Who thinks he’s won
A battle of wits
I realize how tired I am
How
Angry
Why should I have to
Trot out my family tree
My US passport
For every person who can’t image
This country has brown people
Here legally
As citizens, even
My left eyebrow
Reaches for my hairline
The only thing that saves
The fool
Is my husband stepping between us
To put the burger buns on the conveyor belt

Moebius strip logic
Turns love upon itself
Love, hate become one
Magicians
Politicians
Misdirection
False premise as gospel:
Equally weighting the claims of
Oppressed and oppressor is neutrality
The cornerstone
Of a republic whose
Justice is blind
Has never examined
The surface of a still pond
Nor let starlight
Sunlight
Into its interior discourse
Gorges on cerebral fare
Injected with distilled
Spirits of fear
Only for added flavor
Chefs claim
Morning after
The debauchery
Will we dare look in the mirror?

END_OF_DOCUMENT_TOKEN_TO_BE_REPLACED 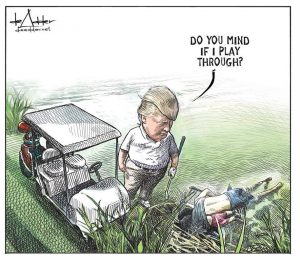 Many people are claiming to be deeply affected by the image of a man and his daughter found drowned on the riverbank after trying to cross the border. However, in our part of the country, on the coast of Georgia, people who jumped into the ocean and drowned rather than be sold into slavery on dry land are celebrated for their heroic resistance. It is almost as if those who survived and labored to build this nation and left millions of descendants do not count. Why are the dead more meaningful than the living? Why are dead aoldiers heroes, while veterans are left to languish on the street?

Is it just ignorance? Someone posted a collage of young men killed by police or agitated whites and identified them as “fallen angels.” That the most beautiful of the angels, Lucifer, chose to become Satan has not registered. Appearances are deceptive and yet they are preferred by many.

The dominion of vision. How can it be countered?

DARPA has been focused on preparing the military to prepare for civil unrest in reaponse to flooding on the Indian subcontinent for a long time. At least that was the rationale.
END_OF_DOCUMENT_TOKEN_TO_BE_REPLACED