The SCOTUS, as do all courts interprets, applies and reviews laws. It does not make law and it does not grant rights. The problem we have is that the Constitution, which outlines a framework for a governmental corporation has only two interests, the promotion and protection of property and commerce.

END_OF_DOCUMENT_TOKEN_TO_BE_REPLACED

Earlier in the day, they were skampering around the yard. Then four of them showed up again on the bamboo perch until something scared them and they scattered. One is exploring the edge of the pond. 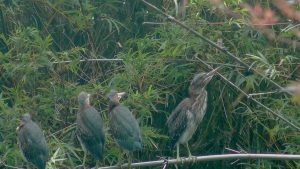 There are too many Catholics on the Supreme Court. Catholicism is an authoritarian belief system with the added deficit of forgiving evil upon verbal admission. That is what Trump picked up at Fordham. If one admits the evil one has done, guilt (responsibility) is washed away. But not really. Shared in secret, guilt leads to an unholy alliance.
END_OF_DOCUMENT_TOKEN_TO_BE_REPLACED

Commerce and christianity are both about selling stuff–saving. Souls and material goods are all the same, looking for a buy-in. What is the incentive for the mark? Increasing population density makes gathering and hunting impractical. Creating need incentivizes subordination.

That is why the family farm had to be actively phased out with monopoly-friendly policies. Industrialization does not evolve naturally. It has to be orchestrated with false promises. Now the negative consequences are obvious. Nature depends on diversity and redundancy. Uniformity is deadly.

Christianity is a perversion of Jesus Christ’s perspective. it resulted from a substitution of the insubstantial for the transformation of substance. Transformation is a creative process that interacts with reality. The insubstantial is a figment of the imagination, the idea which Plato aslo posited as preceding reality. Idealists take it one step further in being content to have an idea and forgetting all about the transformation of the real.
END_OF_DOCUMENT_TOKEN_TO_BE_REPLACED

Triangulation works in both directions, to abuse and to counter abuse. Individualism tries to short-circuit an effective response. Is that the real threat posed by socialism?

Growing in Hannah’s Marsh. Well, actually, up on the dike. 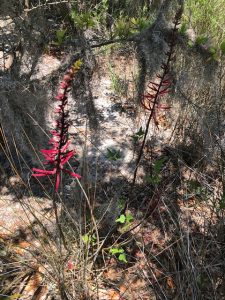 These people were suggested by folks on Capitol Hill who have an interest in not being second-guessed or hauled up short by the court. Fact is Congress can only legislate the behavior of governmental entities and subsidiaries whose creation they authorize. That is why the level of restriction that is to be provided to health care providers is being considered. Legislators, who are supposed to be public servants, have found it useful to rely on corporate entities to exert influence over the people whose ballots elect them. Part of this unspoken bargain has been the extension of benefits (contracts for services, access to natural resources, land grnats, fishing rights, etc.) to ensure that support. Talk of tax cuts to businesses are actually reminders that benefits and preferences are in jeopardy, if business does not deliver at the ballot box, which, when there are only two factions, determines the allocation of power on Capitol Hill. Recently, as the old guard has been retired and more women and minorities have been hired by dissident citizens, the focus has changed to direct intimidation of segments of the electorate, which has discovered that it can control the electoral process from beginning to end. Georgia is the poster child. Neither Ossoff nor Warnock were picked by the political operatives. The two democratic Senators were winnowed from 30 candidates through three elections. That is the story the political professionals do not want told. The political campaign operatives remind me of the resort workers who used to migrate following the tourists. They have no loyalty to persons or place.

Solicitation is a backhanded way to exercise control. What’s the point? To validate the self?
Is a person’s existence in question, if he’s not exercising control over someone else?
END_OF_DOCUMENT_TOKEN_TO_BE_REPLACED