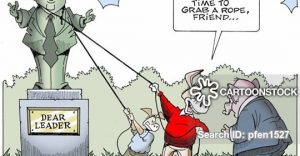 END_OF_DOCUMENT_TOKEN_TO_BE_REPLACED

Members of the Board

The U.S. is a free lunch culture organized to suit the predator and the vulture.

END_OF_DOCUMENT_TOKEN_TO_BE_REPLACED

It used to be common to distinguish between form and function, appearance and performance. Also, it was argued that form follows function. No longer. The commercial universe is all about form. What you see is what you get andmost of it does not work/function. Appearance is the order of the day.

Is that because commerce is fundamentally deceptive. Are people intent on just moving things around to capture a profit simly inherently deceptive? Is Euro-America nothing but a grand deception? The Rev. william Barber is to be admired for insisting that it be made true.

Has the U.S. always been a disfunctional culture because of its commercialization?

Commercialization leads to disfunction as the recorder of profit is substituted for the substance (good or service) being promoted. It is an unintended consequence, but perhaps inevitable when idealists are involved.

Commercialized politics gets ruined by the middlemen. But ActBlue is the Amazon of politics and Amazon is the downfall not of commerce, but of commercialization. Death of the Salesmen.

Yes, the banksters have been central to the exploitation upon which the commercial sector relies. Their role was formalized in 1919 when Congress was persuaded to set up the Federal Reserve Bank system and effectively surrendered its obligation to manage the distribution of the currency. Ironically, this move was originated by the financial geniuses who then went bankrupt on Jekyll Island off the coast of Georgia, based on the argument that the members of Congress are unreliable and could not be counted on to give banksters a monopoly on the distribution of currency.
END_OF_DOCUMENT_TOKEN_TO_BE_REPLACED